I think that I've mentioned before how much I love road trips. Ok, so I've mentioned it many times. I'm sure that some of you don't understand it so I'll try to show you exactly why. Cut me some slack in the quality of the images as most were taken from the Prius in motion. It also became more difficult to take acceptable pictures as the windshield became encrusted with bug bodies.

Mount Thielsen, about an hour from home in the southern Cascades.

Click on this view to enlarge it. Hwy 138 as it leads down to 97. I always think that it looks like "the road to nowhere". 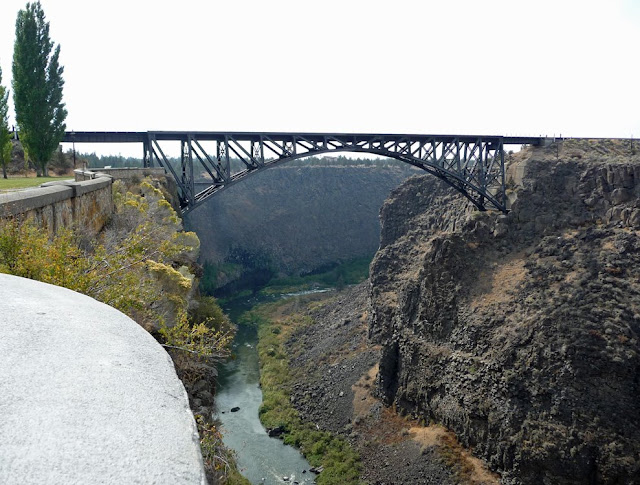 More of Crooked River. This shows the railroad bridge, taken from the old Hwy 97 bridge. 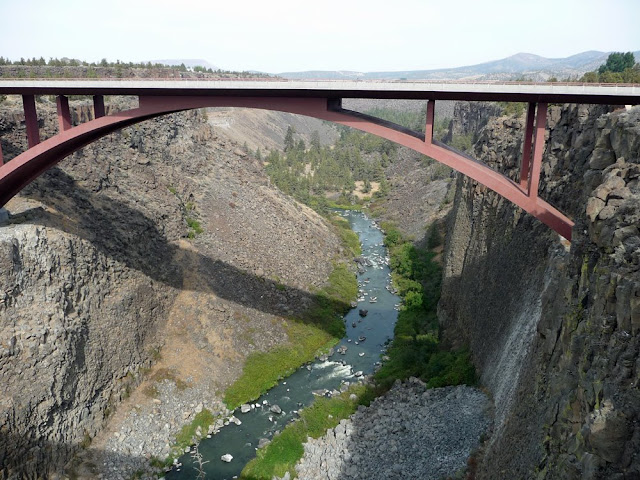 And the new 97 bridge taken from the old bridge.

The Columbia, late afternoon heading east on I-84. I tried to get pictures of the windfarm, but none of them really came out. The white windmills did not show up against the broken clouds. 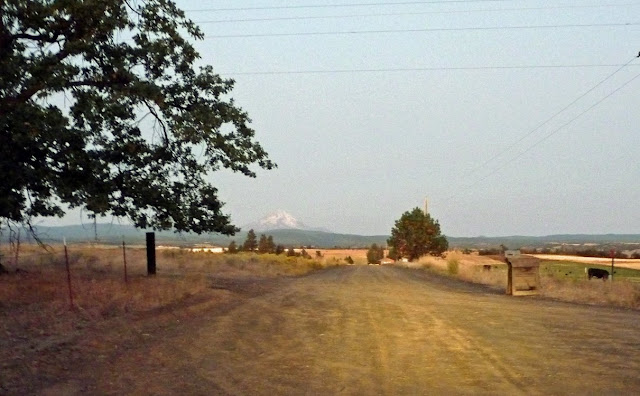 View of Mt Hood as I close Louise's gate. 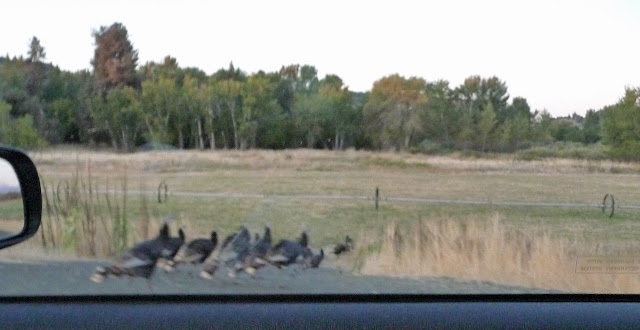 A flock of wild turkeys crossing the road, Tygh Valley.

And a couple of pictures which are just essential "Eastern Oregon".

Butte Falls is about to be evacuated. And now this one boils up in East Medford. This is taken at just before 4 p.m. It's already 20 acres near Cherry Lane, where we have a bunch of alarm clients. 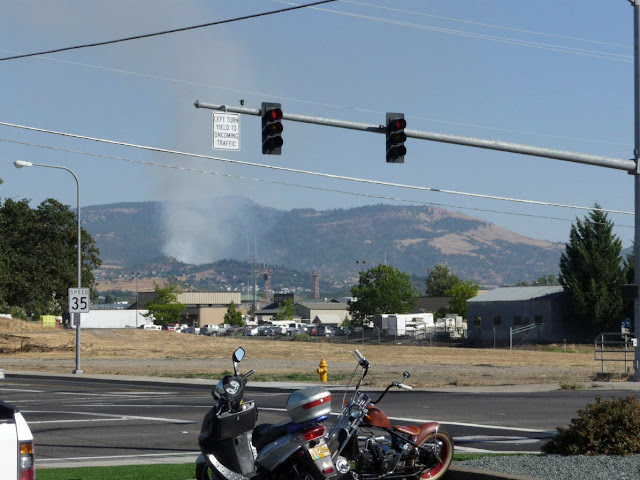 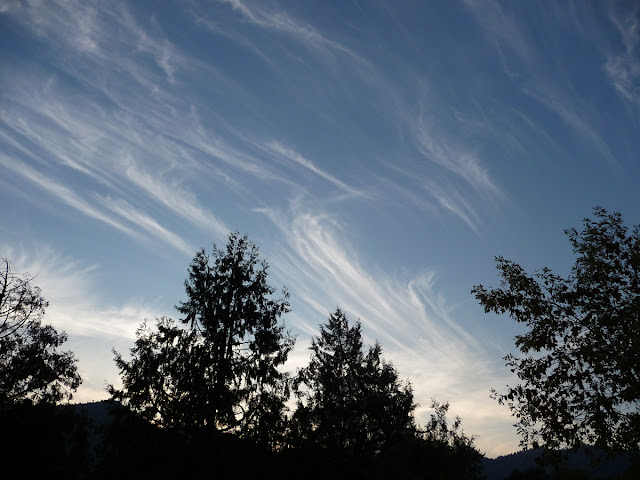 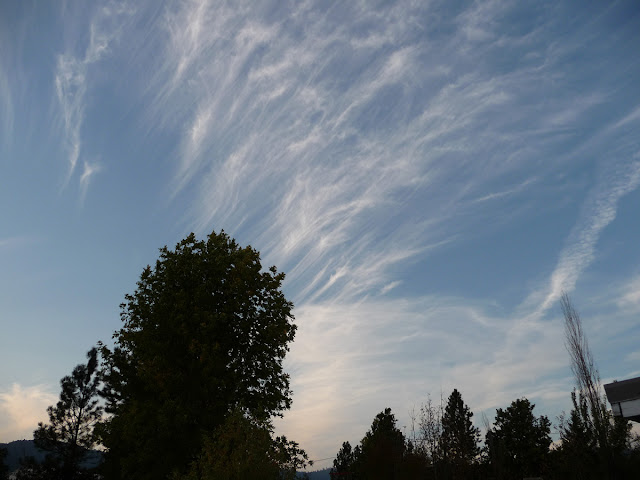 My first entry for Skywatch Friday. Made from our patio yesterday evening while barbecuing salmon burgers. The winds make for interesting cloud patterns and for once blew the smoke away from us.
Labels: home, Oregon 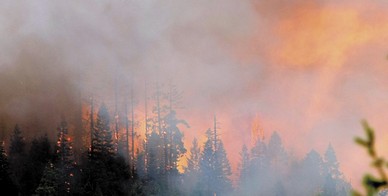 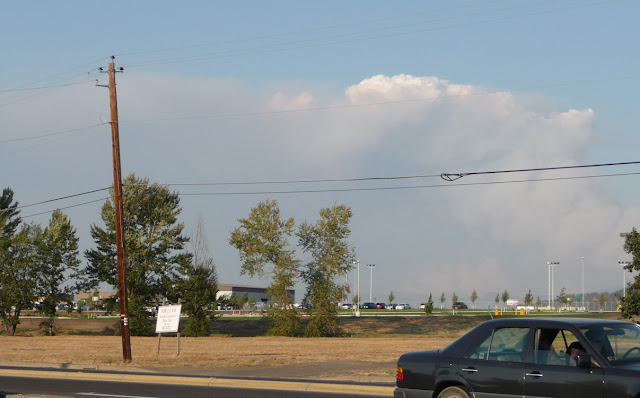 . . . looked like this from the office as I was leaving yesterday evening . . . 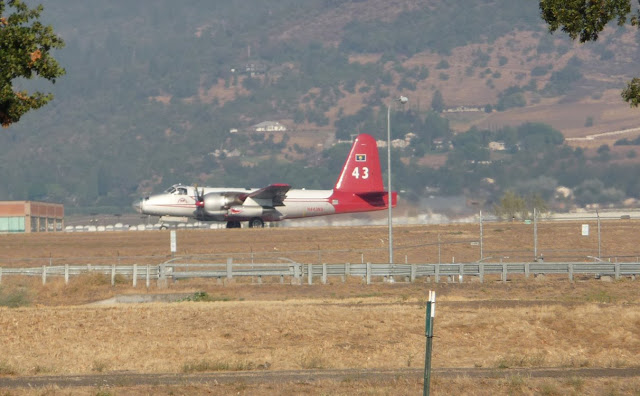 . . . making for a lot of traffic at the airport with tankers coming in-and-out.
I will be so glad when the rainy season starts. Except for October 18th. It could not rain that day, please.
Labels: Oregon, The Day Job 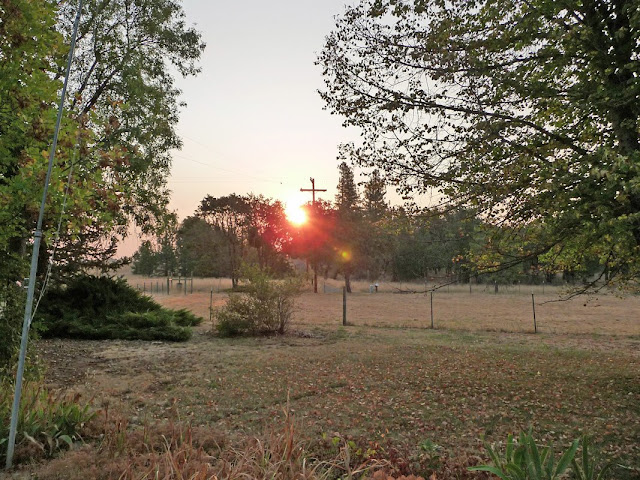 Early morning sun through smoke.
The current fire, the "Lonesome Complex" is listed as being 21 miles NE of Prospect so is relatively close. We keep track on the NWCC fire map. It's a good map: you can zoom in and see how the smoke drains right down the river to us. Those aren't light clouds in the picture below: that is the smoke which settles overnight. 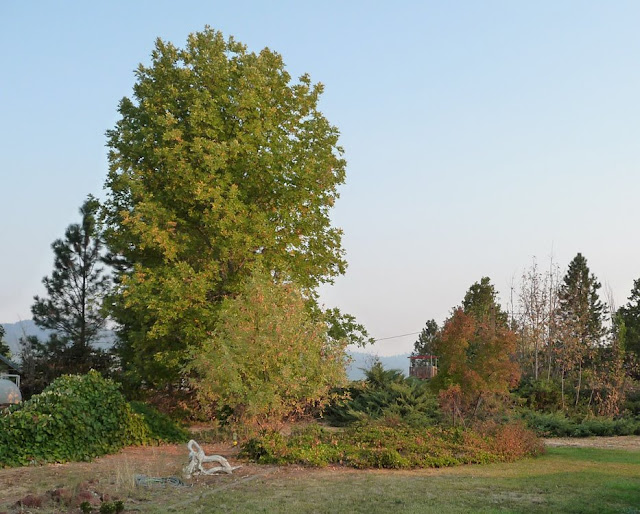 It's early fall here. The days are still hot but it cools off quickly when the sun goes down, which is earlier every day as we approach the equinox. The landscape is painted in shades of gold and the trees are starting to drop their leaves.
Labels: home, Oregon

All my life I've worked hard to compete
To be part of the "liberal elite"
With wit that's keen
And Prius that's green
And Birkenstocks on my two feet.

Based on the Tom Buffenbarger quote:
"I've got news for all the latte-drinking, Prius-driving, Birkenstock-wearing, trust fund babies" which is not new but I still muse about.

Now technically I'm currently wearing Keen sandals, drink my Peace Coffee black, and long for a trust fund so that I didn't have to work for a living . . .

But I have my Prius!

I think that I'll go buy some new Birkenstocks to go with the socks that I'm going to be knitting. Richelle talked me into going to a yarn store in Eugene and the knitting bug bit me again. I've never tried socks before so I'll let you know how that goes.
Labels: News and Politics, Poetry

Thanks so much to everyone who sent their well-wishes today. I feel so fortunate to have the many friends that I've made through the dog world. And Mandy, too!

From my son, and I'm proud to be his mom:
Mom took my sister Tammy and me out to the Jacksonville Inn for lunch. With a little twist: it was the monthly meeting of the local chapter of the Red Hat Society. It turns out that my mom is "Princess Patty Rose" and the self-described "President of Vice". Who would have known about her secret life? 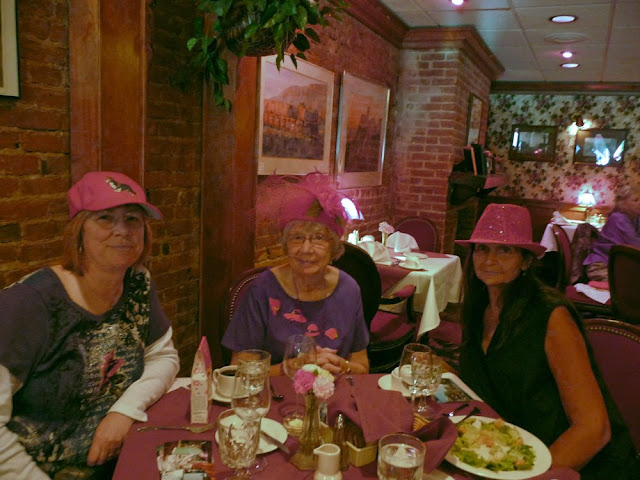 Left to right: me, Mom, Tammy, picture taken by my auntie Gay.


And see, I was even equipped with my own red hat (Cardigan embossed, of course) so that I did not need a loaner. And it just happens that I found a great purple shirt while I was shopping in Eugene with Richelle last weekend, not even thinking about the fact that I would need one!

Yes, the Jacksonville Inn was where our beloved president stayed when he came to town last election go-round. But we'll forgive it.