One of the questionable benefits of having a birthday later in the year is that you have several months to get used to the idea of being older.   This is a big one that is taking quite a bit of getting used to.  I am still trying to work through it in my mind, as I am sure that I don't feel almost sixty.

Maybe "sixty is the new forty"?   Forty didn't bother me much at all.  And the fifties have gone by with no major changes to make them memorable.  The next decade will be quite different.

It is ok to drive the speed limit.  It is after all about the journey, not the destination.

Function over Fashion.  It felt good to cut my hair off.  Also I have a preference for silver over gold in jewelry, so why not in hair?

Yes, I do walk more carefully at times.  Especially when it's icy.  So what?  And speaking of such things, I no longer see a need to prove that I'm tough.  Thumbs up to motorhome with sleep-number bed.  Thumbs down to roughing it with a flat air mattress.

It's not "old lady skin".   It's well-worn and comfortable, like a favorite pair of well-washed jeans.

There is life after PMS.  Being post-menopausal has turned out to be a very good change of life.

7. Absolution by Miriam Herin.  Found on kindle: I don't know whether it was free or if Tom picked it for 99¢, but I hope that he didn't pay any more than that. I read it as it did have some good courtroom scenes but I admit that I skimmed large sections of the backstory from the 60's. Maybe it would hold more interest for someone who wasn't around in the 60's.

Currently reading Neal Stephenson's Snow Crash. A favorite of Jamie and Catherine's, it is the book that inspired them to name their puppy "Hiro" (Japanese for "first"). An entertaining book, set in sort of a post-apocalyptic California where people have a matrix/second-life as well as a real existence and religion is compared to a virus.

Concurrently reading the late Christopher Hitchen's Arguably Essays. Which does rather tie in.

Currently watching our way through 33 episodes of Breaking Bad on Net Flicks. Set in Albuquerque, some of the characters might need a good defense attorney at some point.
Labels: Books, life

I Believe That Our Drought May Be Over

A few pictures from the 4+ hour drive yesterday from Molalla to the Rogue Valley. Creeks have become rivers, fields and pastures are now lakes. No, there are no actual lakes passed on the drive. 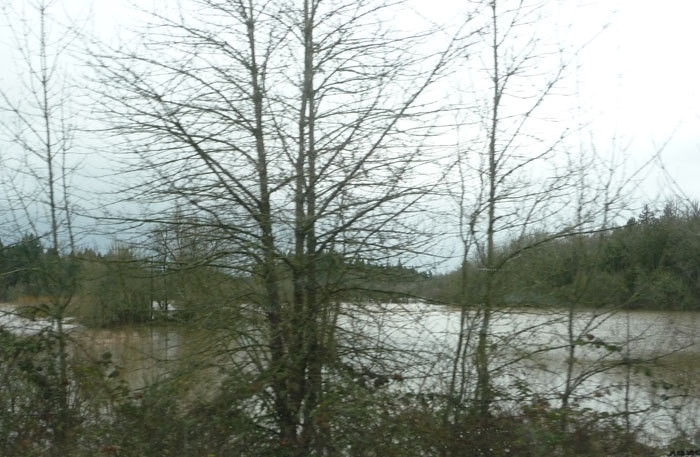 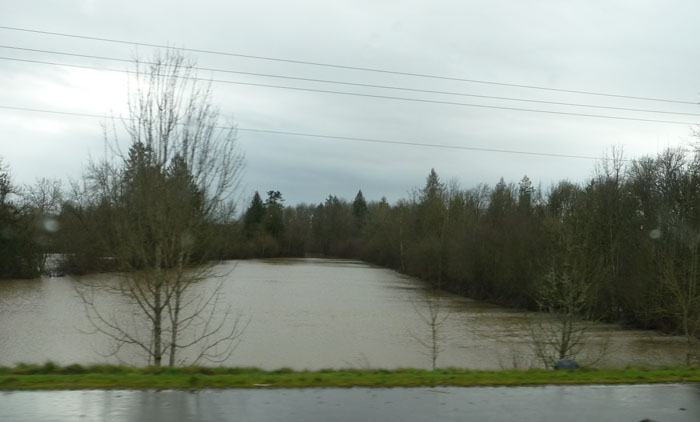 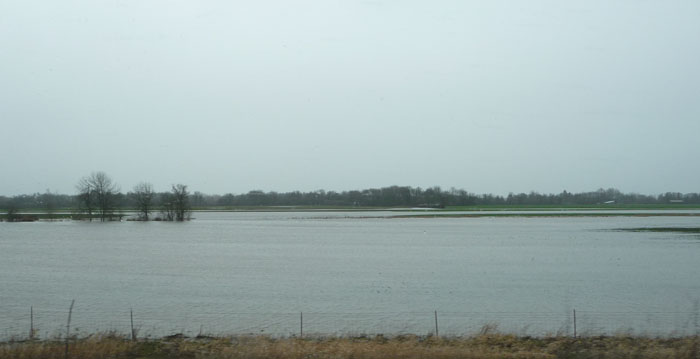 And continuing to ramp up the treadmill work preparatory for the NYC trip.


5. Jonathan Saran Foer's Extremely Loud & Incredibly Close
The movie (Tom Hanks and Sandra Bullock) is probably good but it can't possibly match the book.  It is being touted as a "9/11" movie, but I found it to be less about 9/11 and more about means of dealing with loss.  Images of 9/11 are juxtaposed with stories of loss by the boy's grandparents during and due to the bombing of Dresden.  I read the book in two days last weekend, unable to put it down.  I give it my highest recommendation.


I've started highlighting some of my favorite passages so that I can recall them.


"In the end, everyone loses everyone."
"I've spent my life learning to feel less.  Every day I felt less.  Is that growing old?  Or is it something worse?"
"You cannot protect yourself from sadness without protecting yourself from happiness."
"I understand, now, the tragedy of my childhood.  It wasn't the bombing.  It was that I never once liked a photograph of myself."


I'm now reading Page from a Tennessee Journal by Francine Thomas Howard.  It is set in 1913-1914.  I find it difficult to believe that this is the world my grandparents were born into, particularly my Grandma Ginny who was born in Bumpus Mills, Tennessee in 1914.  Or that this was the time of her parents, my great-grandparents, who I was close to. They moved to California with their 5 children in the back of a pickup truck when grandma was 13.

I am finding the Fire even easier to read with than the original kindle. So far since Christmas I have breezed my way through John Grisham's The Confession, Stephen King's UR, Margaret Atwood'sThe Handmaid's Tale, and Ian Graham's Unbillable Hours. Over two hours of that time has been while walking on the treadmill, not that it has had any benefit at this point.

Now I'm a few pages into Jonathan Saran Foer's Extremely Loud & Incredibly Close. I heard a report about the movie yesterday on NPR and could tell that I needed to dive into the book first. His Everything is Illuminated ranks high as one of my all-time favorites.

We've also been using Netflix to catch up on some tv series we originally missed, preferring to skip those things with commercials.

Portlandia. OMG, why didn't anybody tell me?

For the New Year from Neil Gaiman a decade ago:


"May your coming year be filled with magic and dreams and good madness. I hope you read some fine books and kiss someone who thinks you're wonderful, and don't forget to make some art -- write or draw or build or sing or live as only you can. And I hope, somewhere in the next year, you surprise yourself."

And this year he writes:


"I hope that in this year to come, you make mistakes.

So that's my wish for you, and all of us, and my wish for myself. Make New Mistakes. Make glorious, amazing mistakes. Make mistakes nobody's ever made before. Don't freeze, don't stop, don't worry that it isn't good enough, or it isn't perfect, whatever it is: art, or love, or work or family or life.

Whatever it is you're scared of doing, Do it.

Make your mistakes, next year and forever."

That is probably one resolution that I am sure to keep. So get off my case . . .

And for some more:
Did I mention that Santa Claus brought me a Kindle Fire for Christmas? I give it a "thumbs up". Currently reading "The Handmaid's Tale", a recent Kindle Daily Deal. How did I miss this book before?

Years that end in "2" are always somewhat problematic for me. Each one has marked the start of a new decade of life, and I know that this one will hold many changes for us.
Labels: Books, life

A show that's not for everyone, but I really enjoy it. As Tom says, "it's good theater".
Labels: Concerts and Theatre