While six hours to the north winter is setting in, the Napa Valley is enjoying its mild autumn. Friday morning we drove down 101 to Geyserville, then through the Alexander Valley and over the hill to Calistoga.  Then we followed the Silverado Trail south to Napa. Tom had the Serius/XM tuned to Classic Vinyl. I was feeling so nostalgic for the area - and the weather - that I was ready to move back. 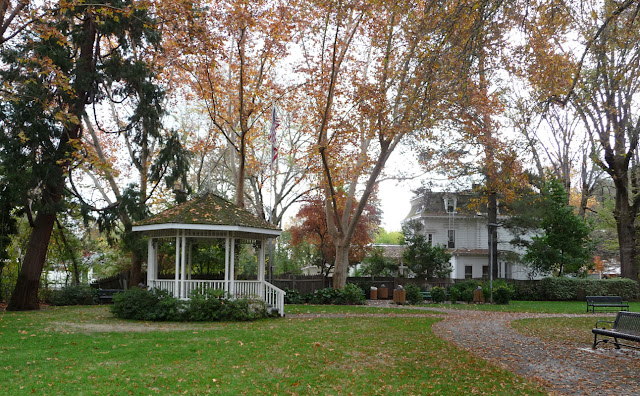 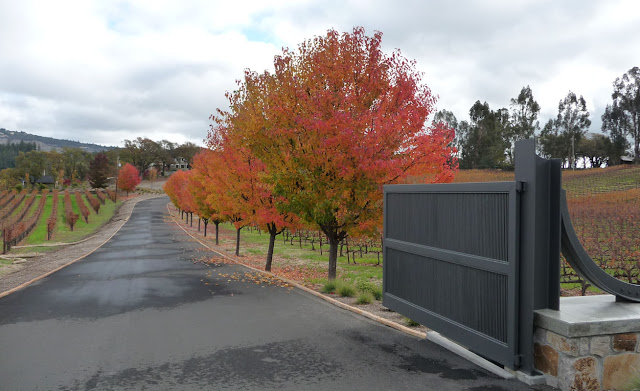 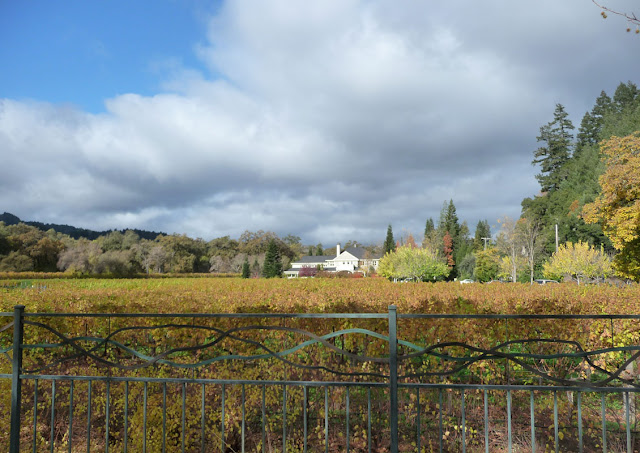 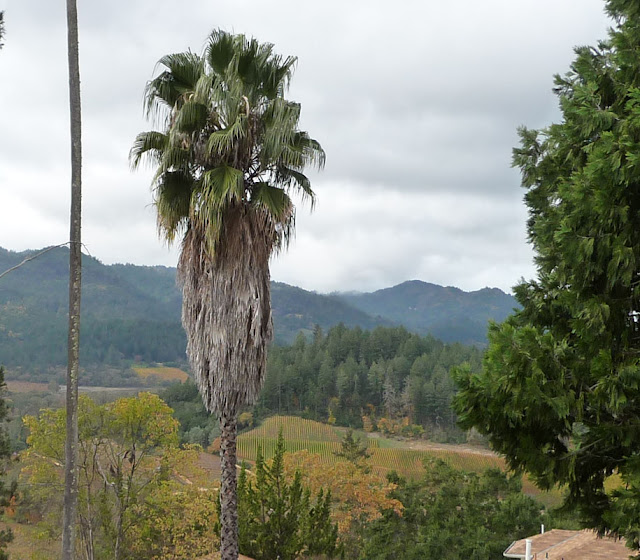 View down to the valley from the hospital.

I hasten to add that I seldom get nostalgic or homesick for Lake County itself.  I swear: every time we're there things look smaller and tackier.  But then Tom reminds me: we're passing through Clear Lake Oaks, Glenhaven, Lucerne, Nice: which have always been shoddy. (And who the heck was it who thought it resembled Switzerland anyway?)
But all in all it was probably a good place to grow up.  Although perhaps it was more the time than the place per se.
Labels: California

Party at "The Ranch"

A huge thanks to Alden for hosting our little get-together on Friday. We had so much fun being with "the family". 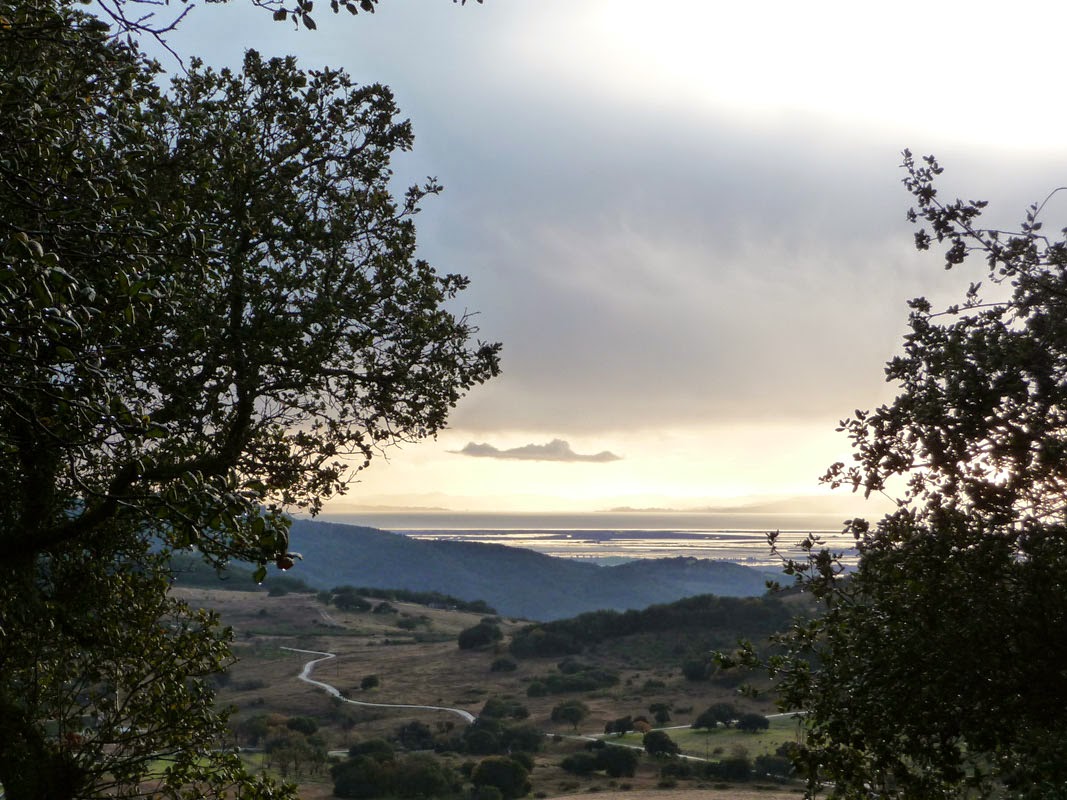 I had been out to the ranch before, though it must have been close to a dozen years ago. I remember that it was the first time Juneau had ever seen a bulldog and he "screamed like a girl."  The house is lovely, dog-friendly, filled with horse antiques, and has a breathtaking view all the way to the bay. The dogs had a great time.  I didn't get too many clear pictures unfortunately, as they were in constant motion.  Though the glass of wine in my other hand probably didn't help. 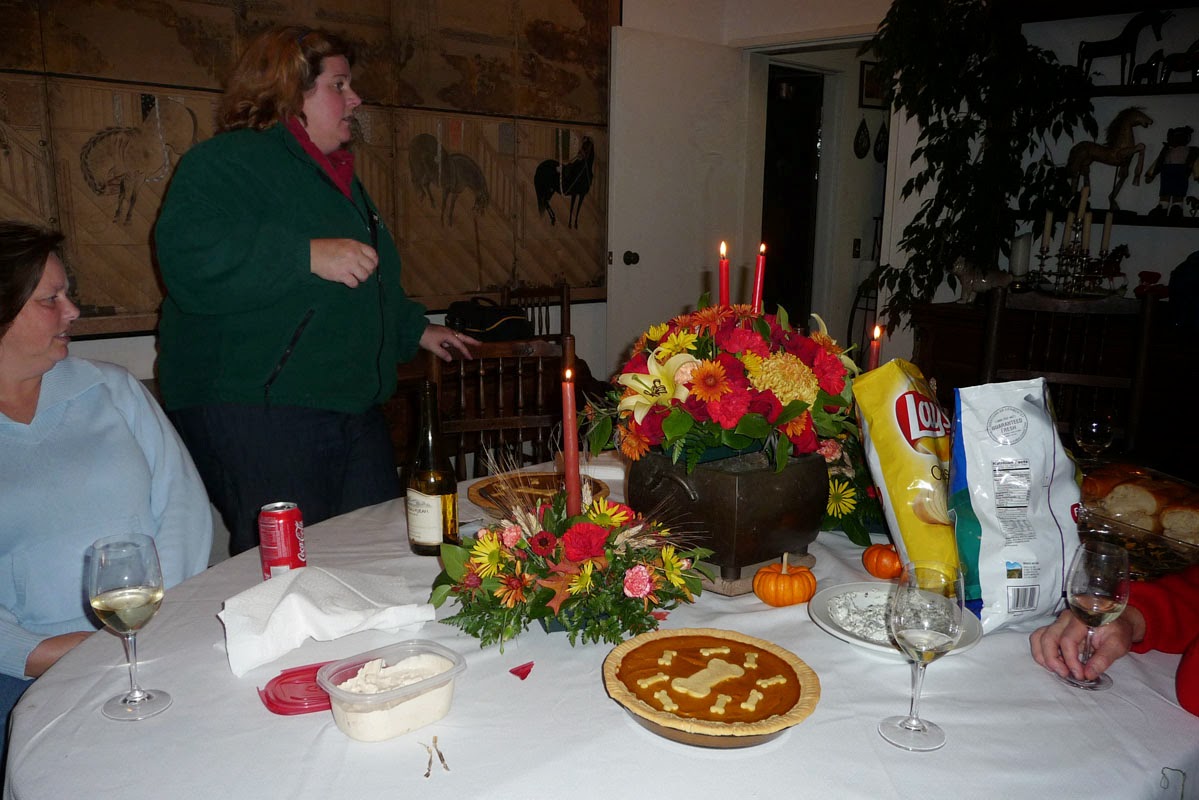 The humans had a great time too.  We might have stayed out on the deck longer, but a brief thunderstorm drove us in for turkey sandwiches and pie. 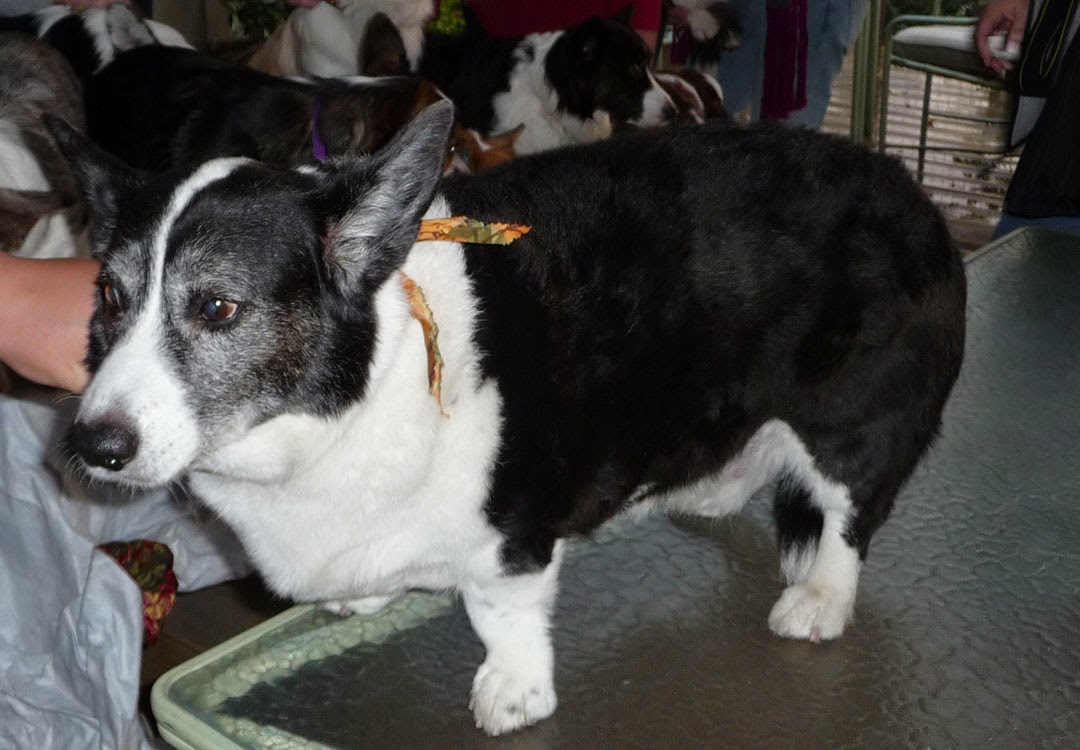 Duncan looks so much like his mother as he ages.  Yes, he is still "Chunky Dunky" but Alden is working on it.  And he says that he doesn't have to do the table thing anymore.  He's retired. 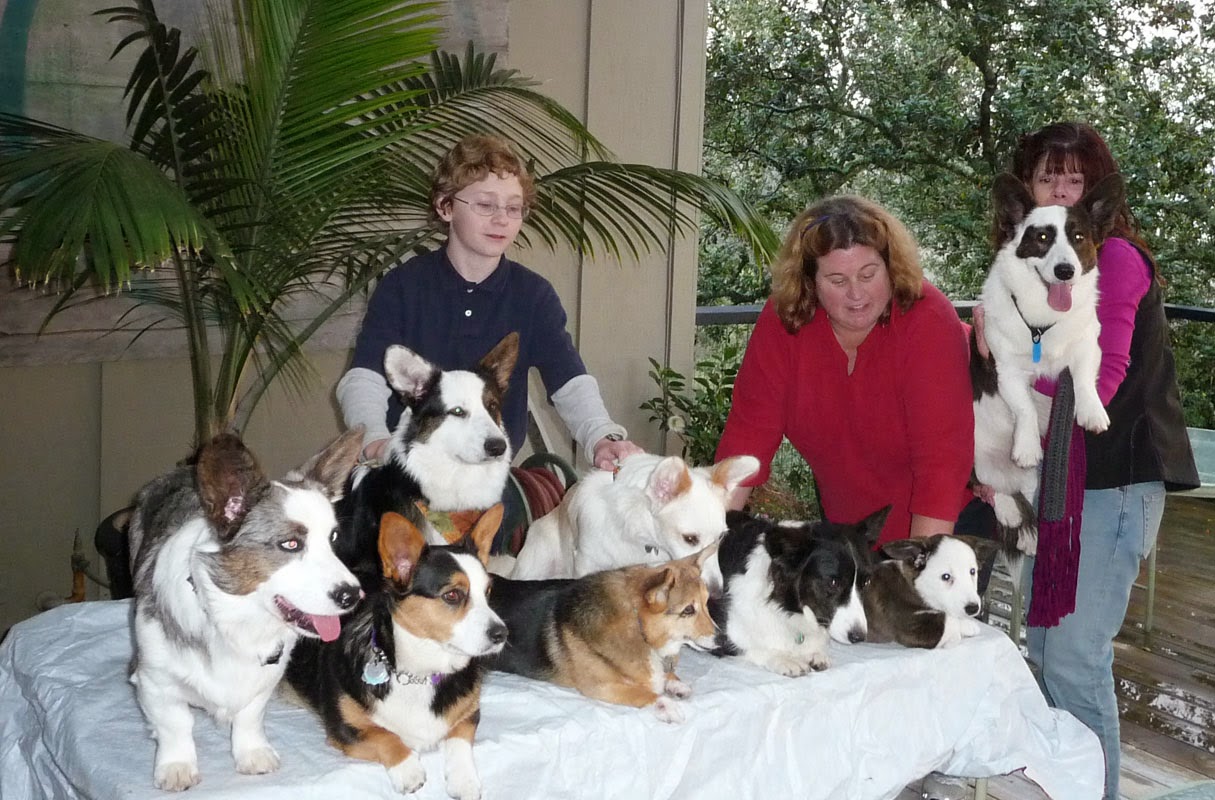 Some of the attendees included Captain, Malibu, Fig, Elbe, Sage, Denali, Watson, and Pilot.  Alice was in attendance the entire time but had partied so hard that she asked to get back in her crate in the Element right before the group photo at the end.  In all, I believe that we had eleven Cardigans, one Pembroke, and one poodle in attendance.  There was also a German Shepherd but he didn't seem to want to join in the festivities.  One of the high points was when Alden's parents retired to bed and Pie ran behind and jumped up to join them, soon aided by several of his nephews. 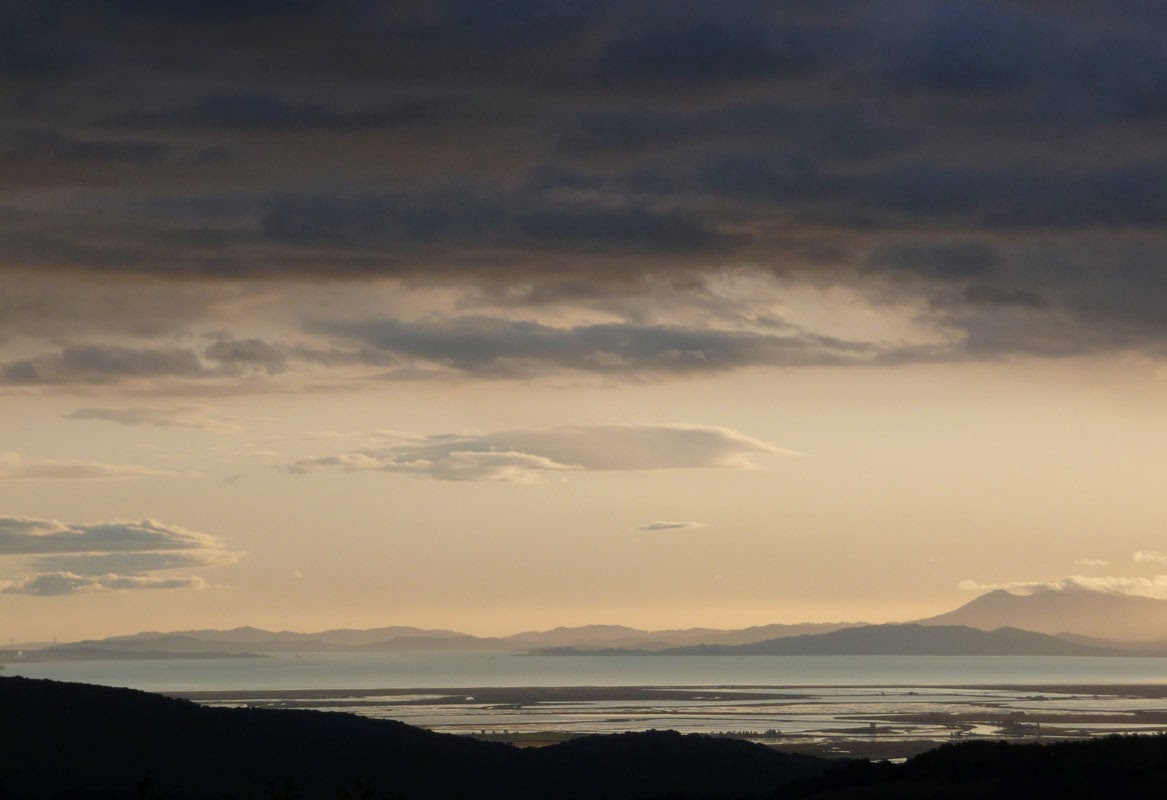 As evening fell, the rain cleared.  This view from the deck is of the bay with Mt Tamalpais in the distance.  If you enlarge the picture, you can see the towers of the Golden Gate bridge on the left.
Labels: California, Cardigans, family 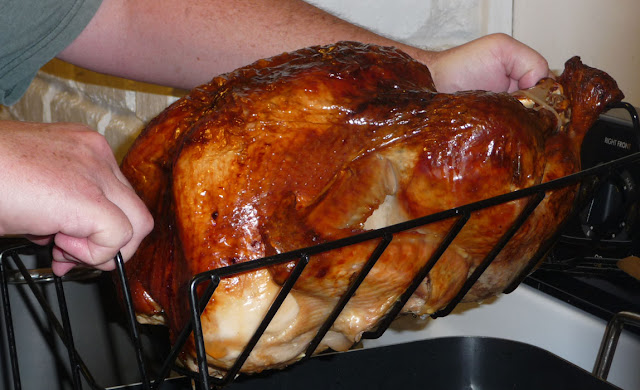 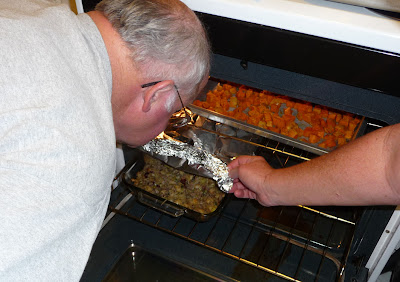 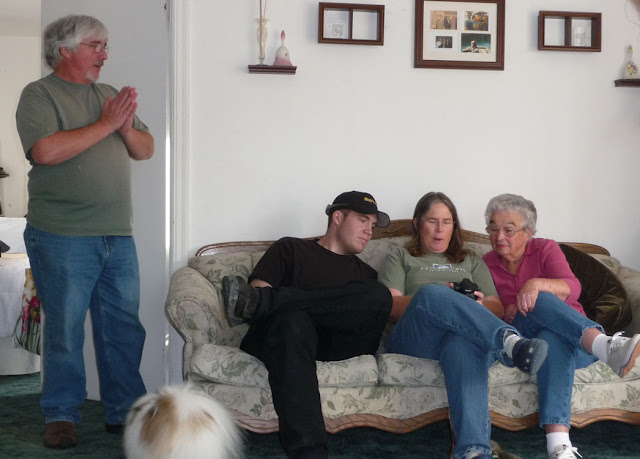 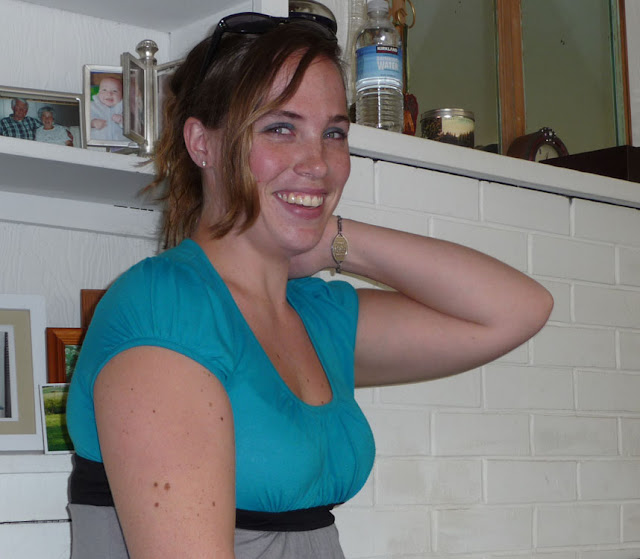 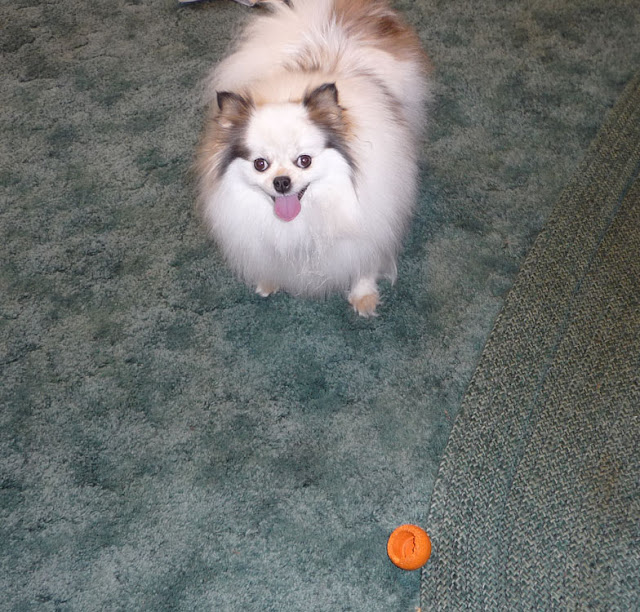 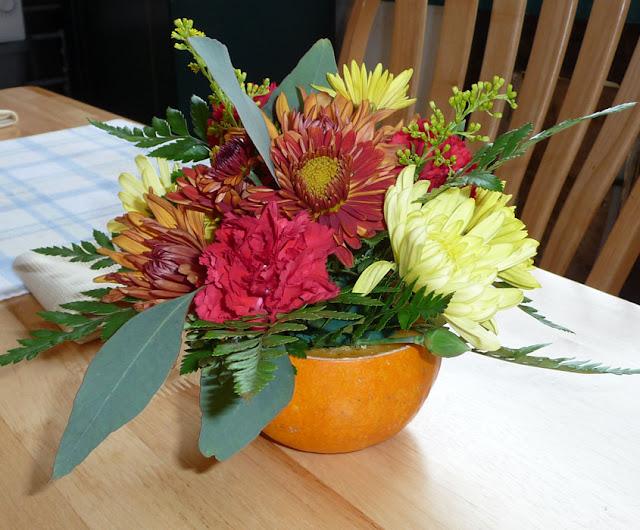 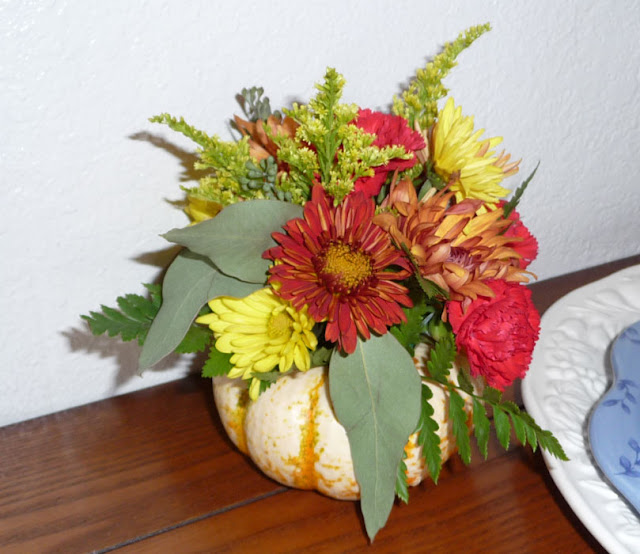 After meeting in Cottage Grove to hand-off  a dog yesterday, we took a leisurely trip home, enjoying some back roads and fall colors, and escaping the fog and smoke at home.  No, I don't understand the wisdom of allowing slash-burning on a day when the air is already stagnant (the usual state in November). Tom drove while I managed to get quite a bit of knitting accomplished.
We stopped for a belated birthday brunch at Tolly's in Oakland.  We were alone in the dining area when we first arrived, and were led to a cozy table for two by the fireplace.
These pictures are from the "Colliding Rivers Viewpoint" in Glide, east of Roseburg.  Two forks of the Umpqua meet here.  It's not an exceptionally exciting collision at the moment, but in the floods of 1964 the water level was 5 feet over the point where we were standing.  There was a sign to tell us. 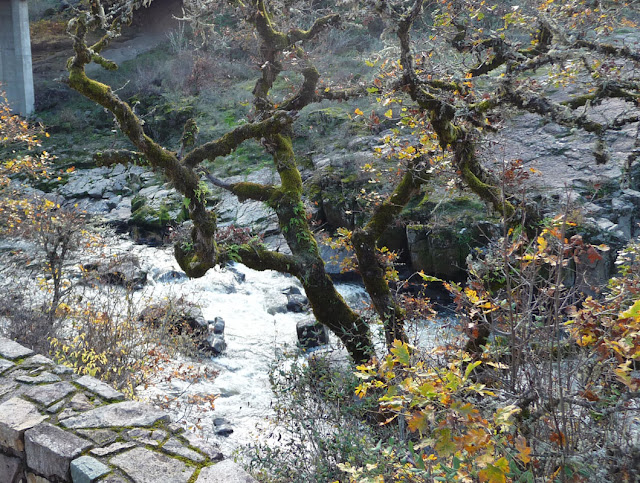 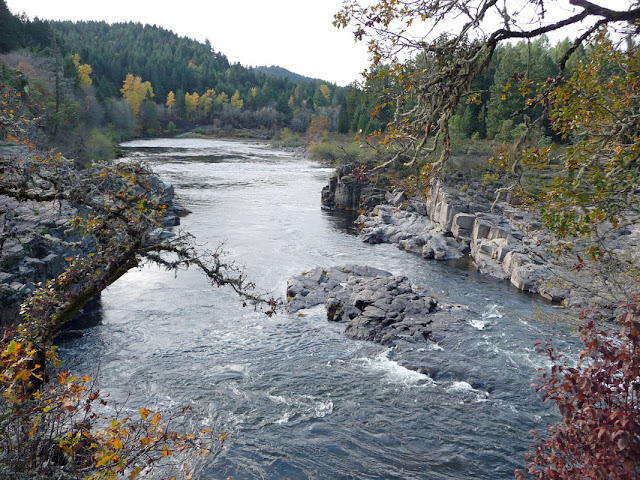