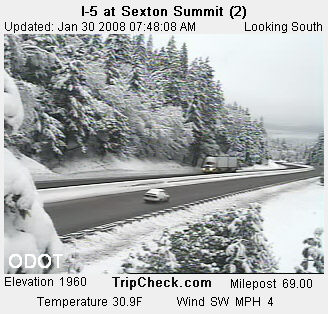 Ok, this whole winter wonderland thing is getting a bit old. This is the third morning in a row that I've been on a snow schedule. It's dangerous out there with the idjits on the road. And I know that there is black ice under the snow. My car told me it was there as I was coming home last night. 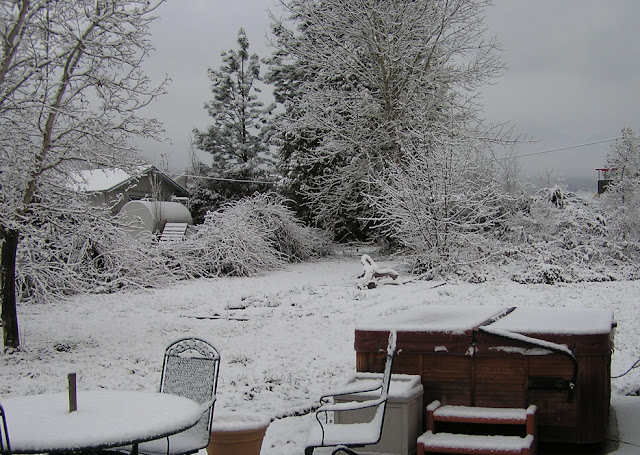 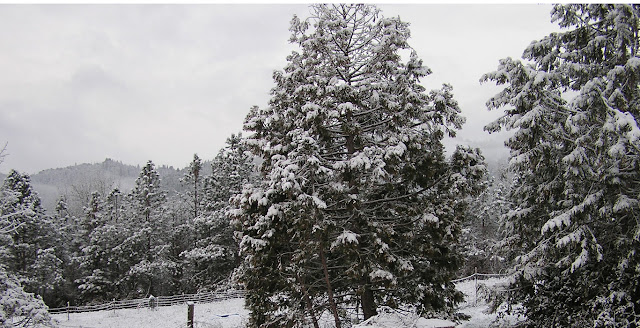 See? Even the truck drivers fall into the idjit category. 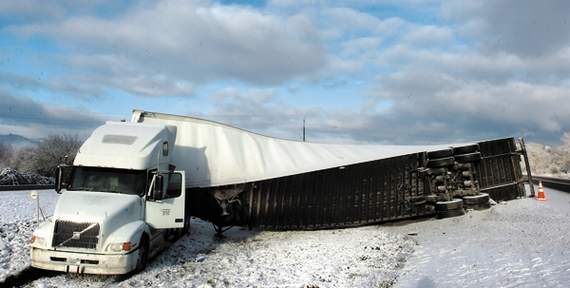 Picture from Medford Mail Tribune a couple of days ago.

JoAnne mentioned the ice storms of 1996 on her new blog. Ah, I remember it well: twelve years ago. That would be the great ice storm that hit while Donna Daniels and I were in Hillsboro breeding Smoky and Julie. Yes, that was quite a memorable experience. I know, some of you are laughing about my sniveling at a few inches of snow. Like for instance Mandy & Henry whose car got stuck an a 2.5' deep ridge of snow in front of their house. But we're not supposed to have to deal with this. If I wanted snow, I'd live in Spokane. Or Idaho. The other day the road cams showed that there was even snow at Seaside and Astoria (imagine that bridge with snow on it!). But I checked now and it just looks wet. 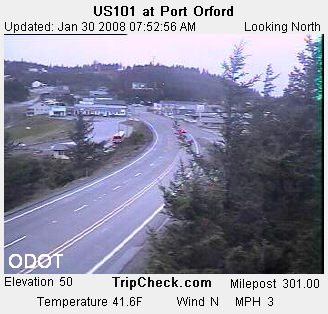 A Funny Thing Happened on the Way to the Dog Show

No, it can never be "uneventful".

Some of you who know SIL Henry will also be aware that he can have a somewhat different sense of humor. So imagine if you will bright and early - strike that - early on Monday morning at the Motel 6 off I-84 in Troutdale. I am just completing my shower when I hear "knock, knock" on the door. I quickly cover up enough parts to crack the door open to see Henry's imposing frame.

"The Troutdale police want to talk to you", he says.

I admit that I stood there silently with a skeptical look on my face.

"No, really. They are out here and say that your license plates don't match any registered vehicle."

I peered around the door frame to the parking lot, and I do indeed see a police car pulled behind the Prius so as to block it in.

Huh? I've had the "C-MYSTE" plates through several vehicles, and dutifully transfered them each time. I tell Henry to let them know that I will be out as soon as I throw some clothes on.

Very shortly I bustled out, with wet hair and not enough on to adequately protect from the freezing-temperature-combined-with-gorge-winds weather. By that time, the officer had read the VIN and discovered that the license plate was recorded by the state as CYMSTE. What is that: CUM-STEE?

The officer (a mere child, by the way) says that I should take care of this as soon as I get home. I mean, he could see that the plates themselves are clearly well used. Or as he said "old".

I said "And here I thought that you were just harassing me due to my bumper stickers." He said "No" and smiled, so maybe that was ok. But then again maybe he was . . .

I didn't think however to ask him what the heck he was doing running my plates. My car was parked quite legally in the lot, and I had filled out the license plate number and make of vehicle on my motel registration. I had been there four nights.

Mandy opined that it was because it wasn't exactly a Prius neighborhood. It was a "beater Chevy" neighborhood. The aging plates on a newer vehicle may have triggered his suspicion that it could be a stolen car. I scratch my head that someone would steal a car with somewhat unique bumper stickers and then put personal plates on it, but . . . well, do you know some of the people that they allow to vote?!

Or for that matter run things. But I digress.

Tom took my car down to DMV on Thursday, and now I have no plates at all but just a trip permit in the window. He and the helpful DMV employee decided that it was easier to turn these in and apply for new personal plates labeled "C-MYSTE" than to convince a bureaucrat somewhere that a clerk had made an error.
Labels: family, Oregon