#23 The Hangman's Daughter by Oliver Pötzsch, translated by Lee Chadeayne. Historical fiction and a not bad Salem-witch-trial-type mystery. Reminiscent of Ken Follett's Pillars of the Earth but shorter. I'll probably read the others in the series.

#24.  Yes, I fell for it.  A co-worker told me that I just had to get the books and told me how much I would love them.   I had  "Looked Inside" of 50 Shades of Grey a while back and didn't find the first two chapters promising, but on Trish's insistence I downloaded it yesterday morning.  Well, that's $9.99 and a day of my life that I'll never get back.   Fortunately I did not spring for the trilogy.  With my apologies for those who are enamoured: the characters are unbelievable, the writing is mediocre at best, and the sex scenes go on for far too long.  How could the guy be running a multi-national company at the age of 27 if he spends all of his time chasing after the girl (not to mention what he does when he catches her)?  Too much sex, not enough psychology.

In the preface to The Picture of Dorian Gray by Oscar Wilde there is a paragraph:

There is no such thing as a moral or an immoral book.  Books are well written, or badly written.  That is all.

On the other hand, it is one of the few books that will no doubt make a better movie.  The characters are already gorgeous paper dolls with no depth.   And the sex . . . voyeurism is better when there is actual viewing.

At Shore Acres this month. 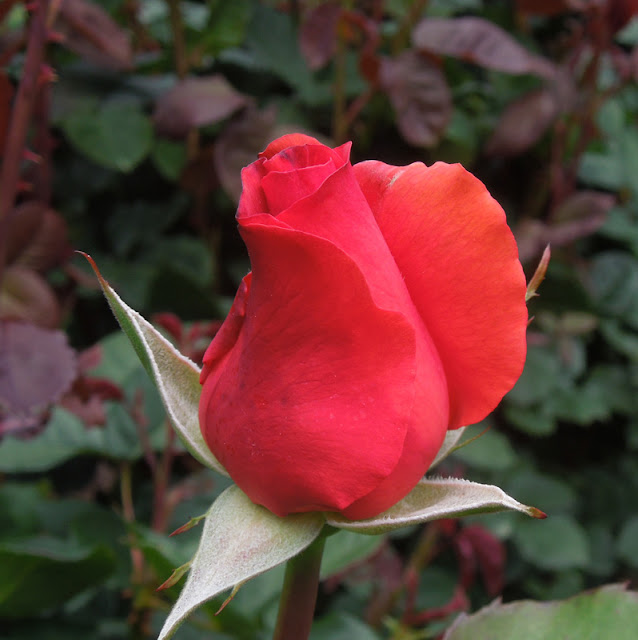 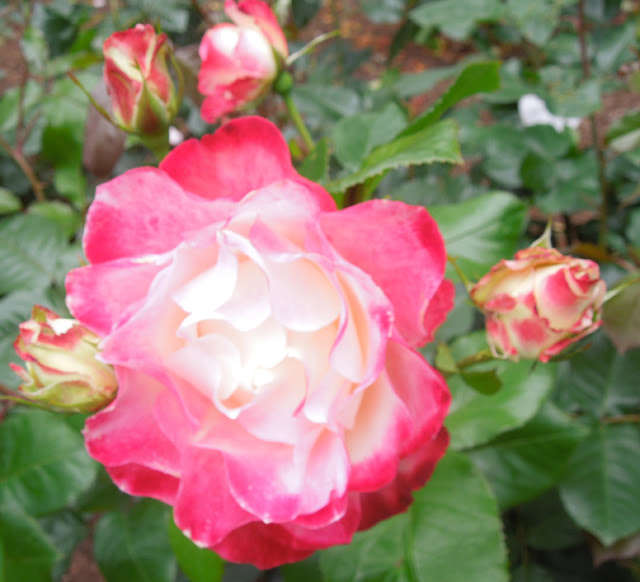 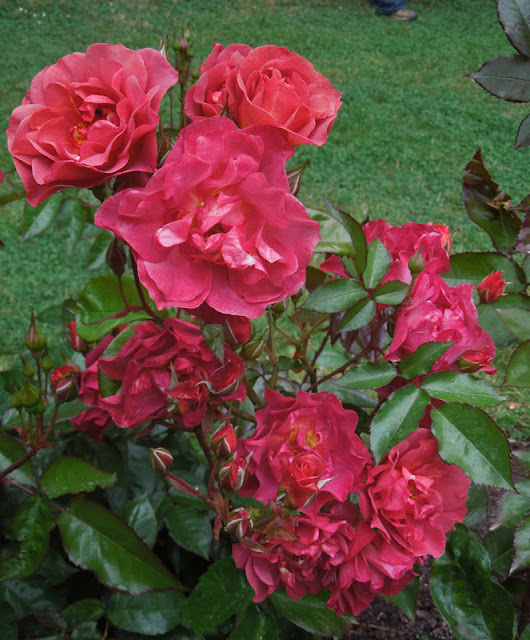 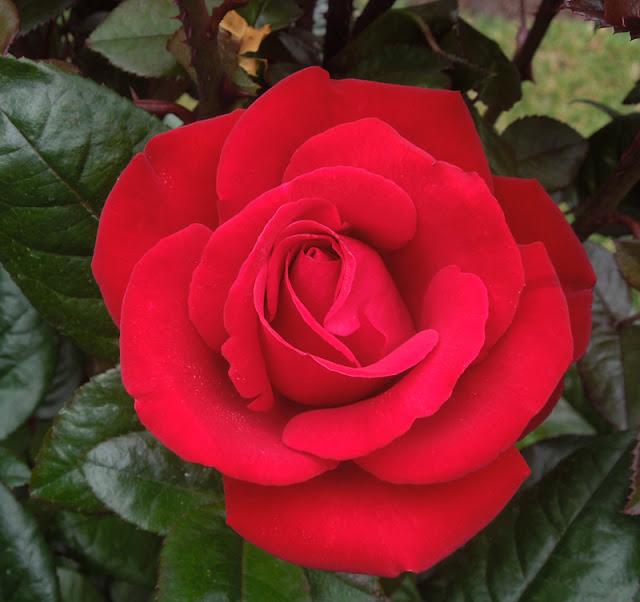 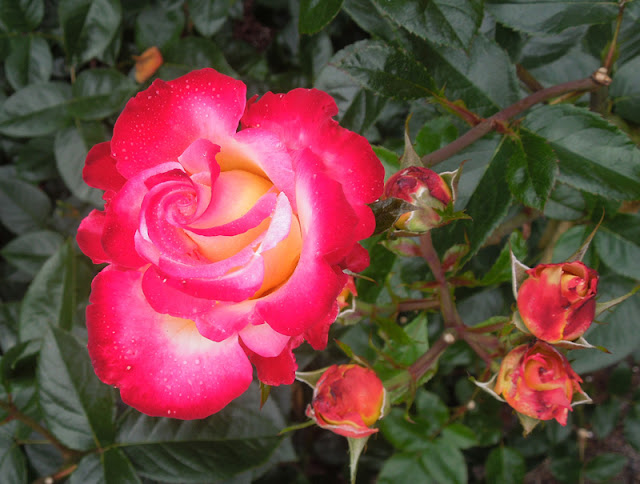 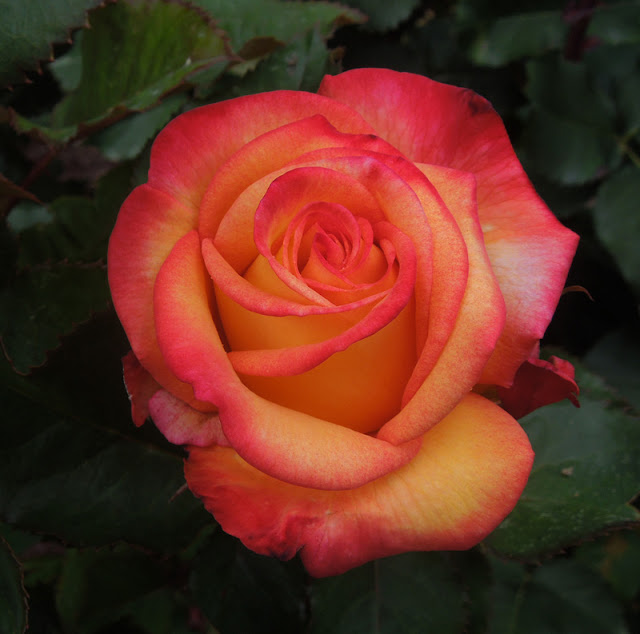 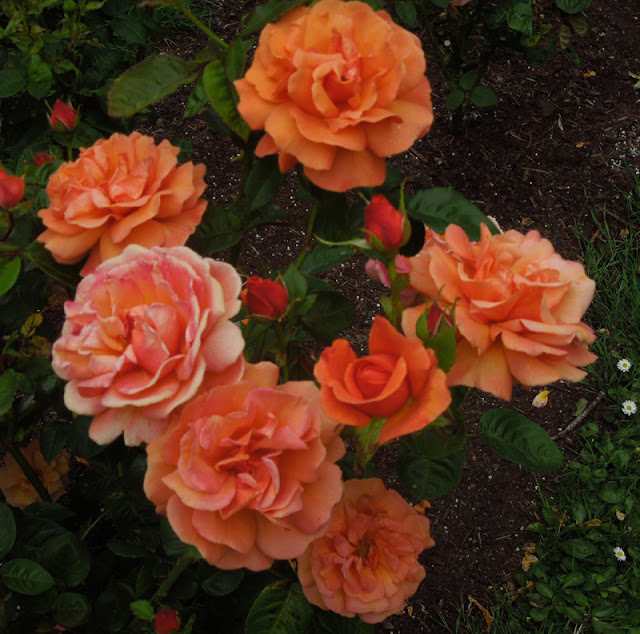 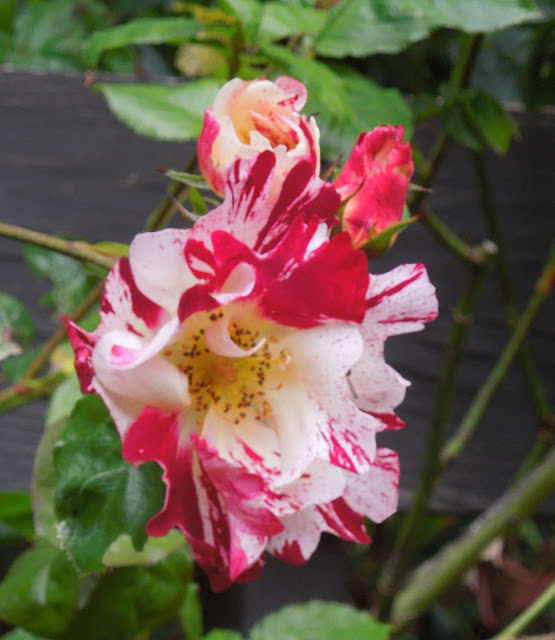 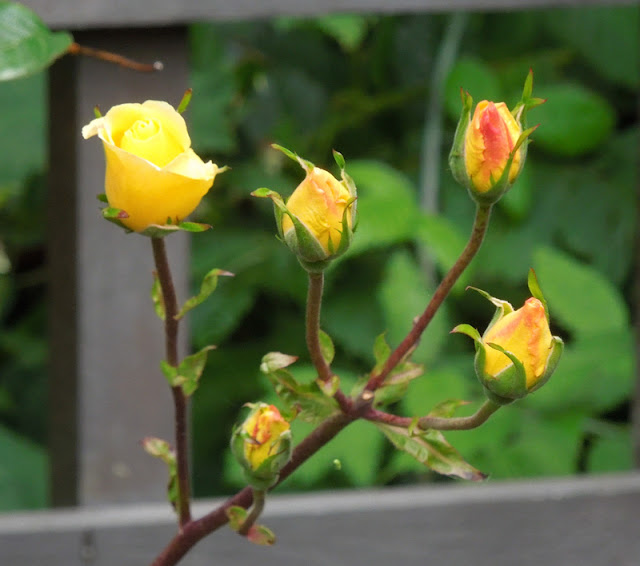 Golden Showers - 1957
A climbing rose.  Tom opined that if developed today it would be named differently. 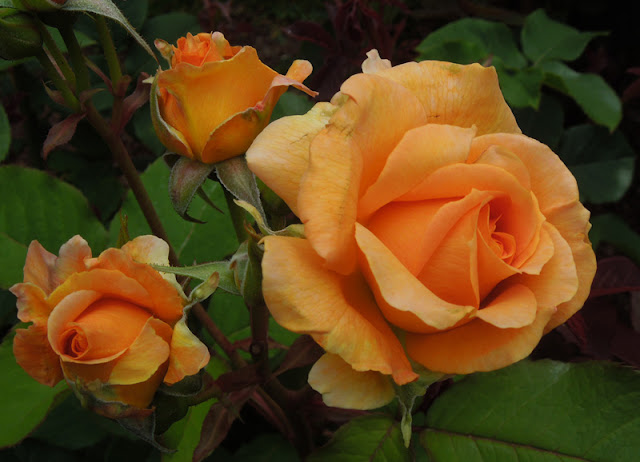 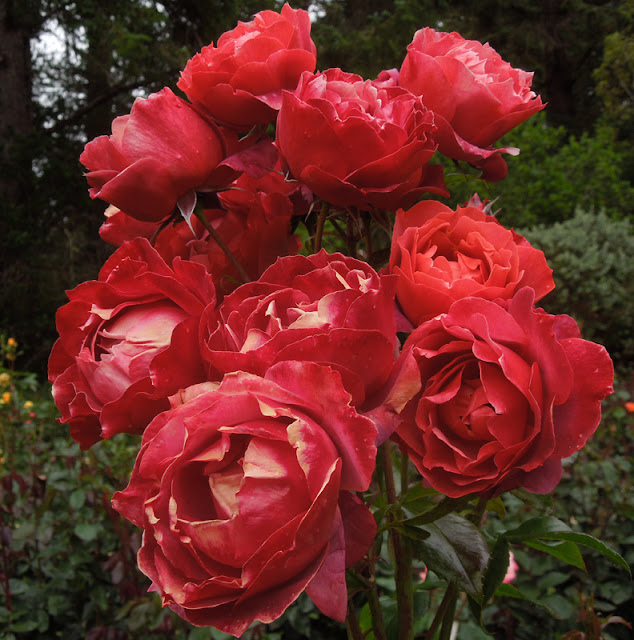 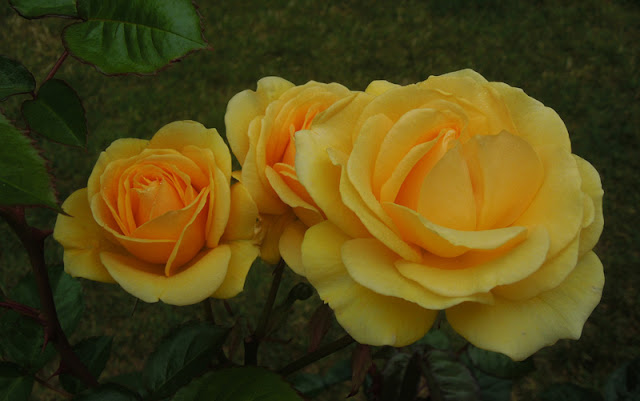 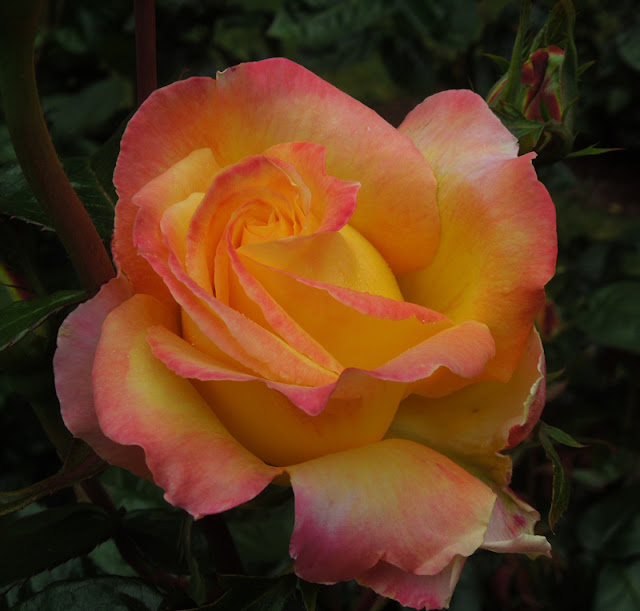 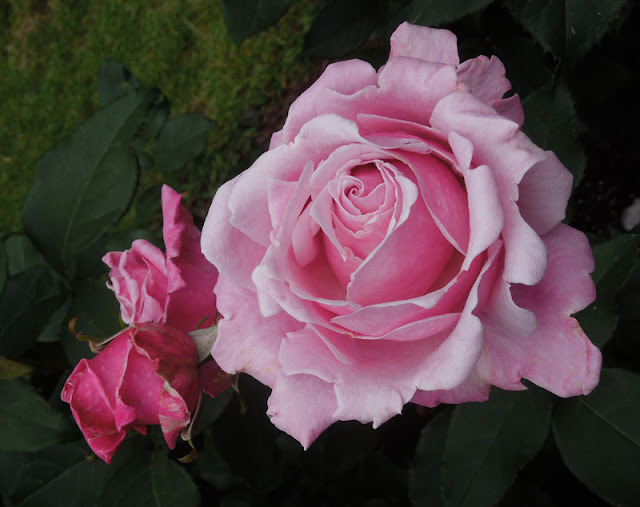 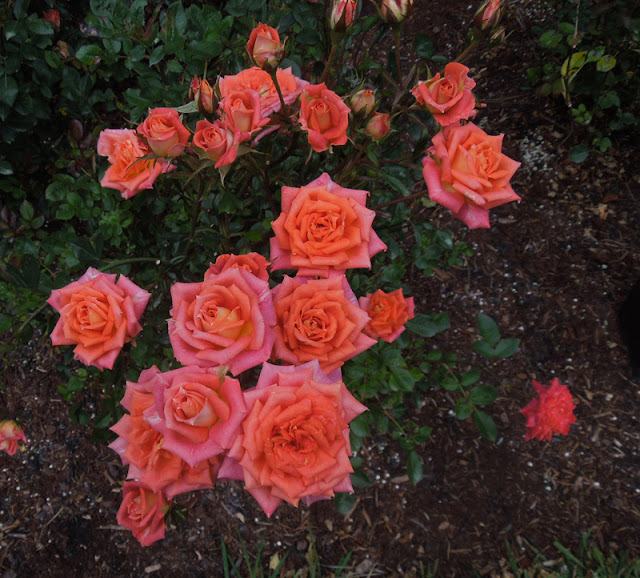 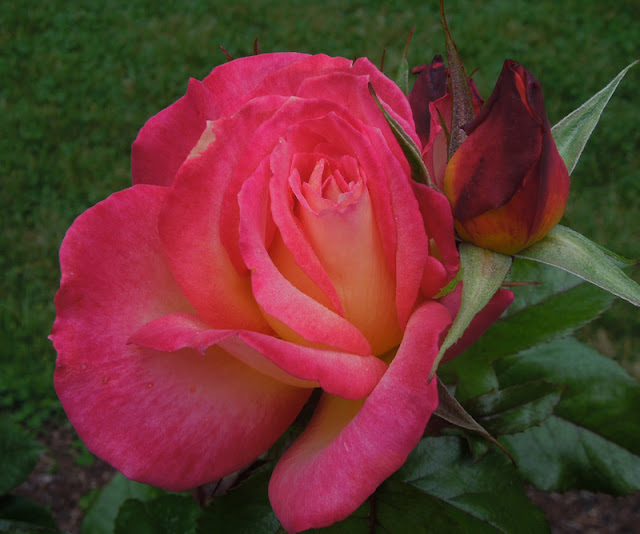 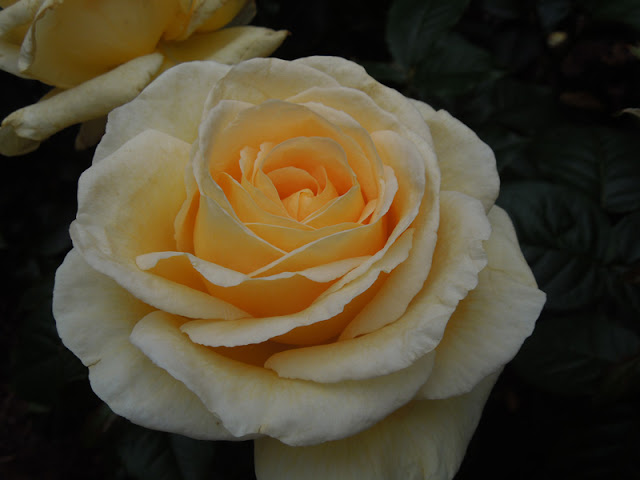 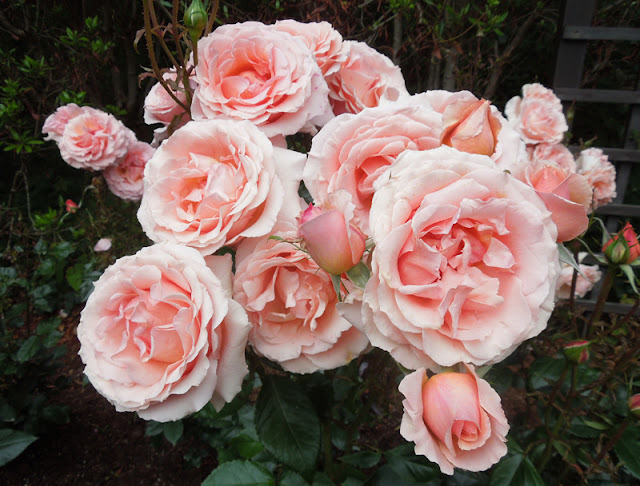 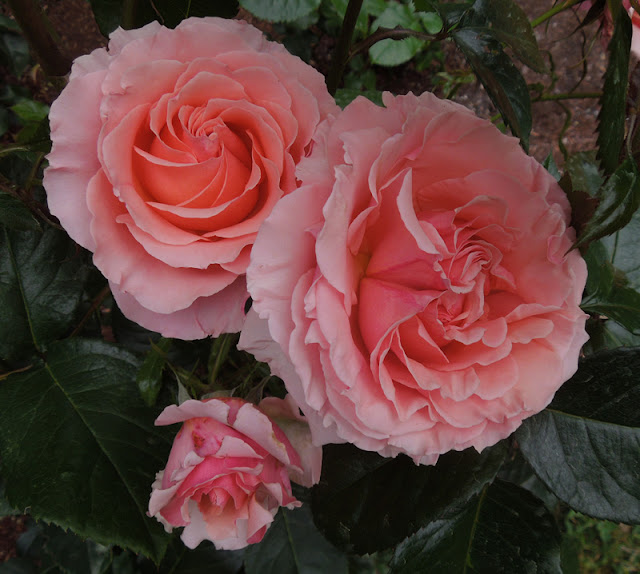 Another shot of Tournament of Roses. 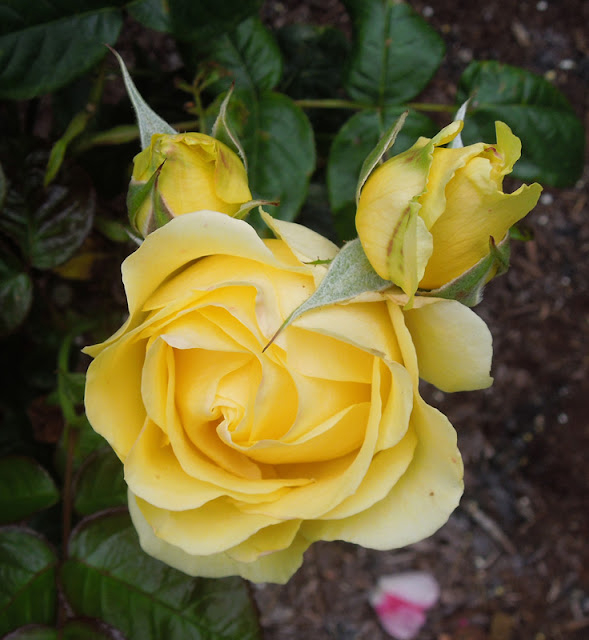 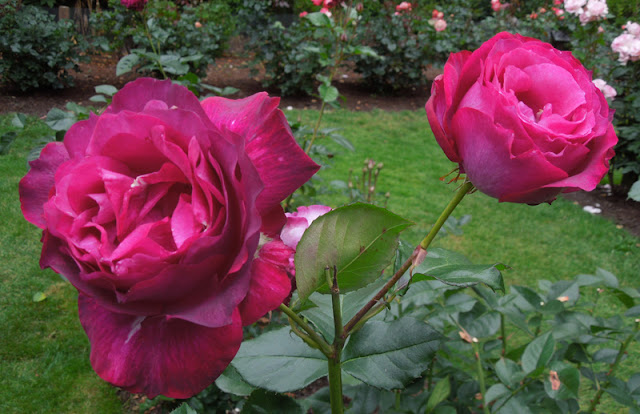 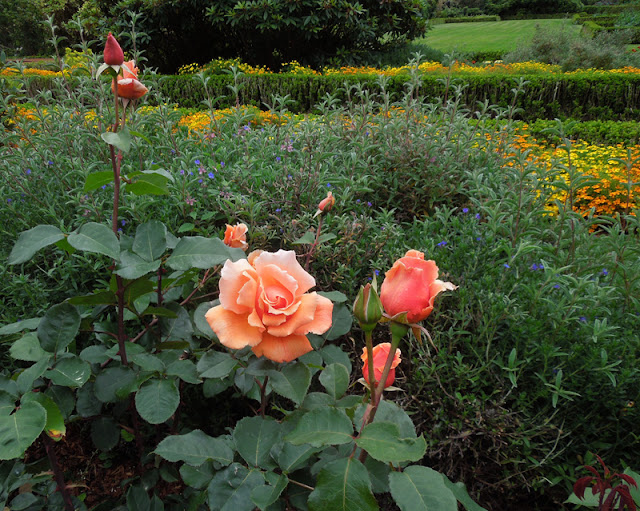 This rose was in the main portion of the park.  I don't have a year, but the tag said its name was "Just Joey". 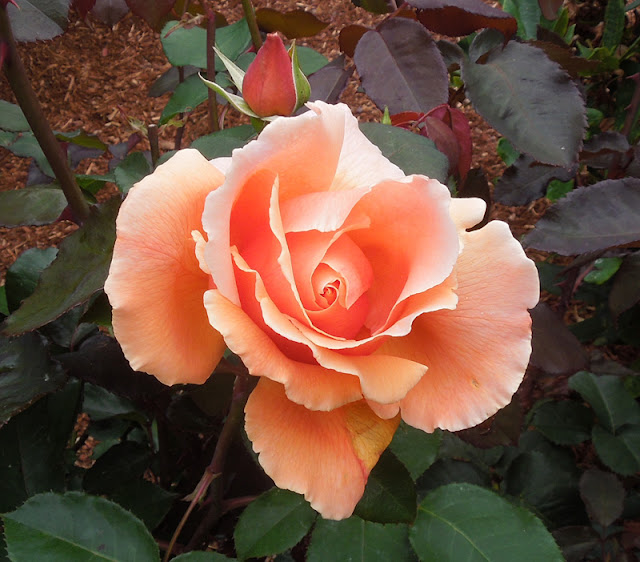 When we were in Minnesota, Garrett gave me a skein of his BFL wool (that's BlueFaced Leicester for the non-sheep people).  On his website he writes:

I can testify that the comfort factor should be very high; this is some of the softest wool I have worked with. 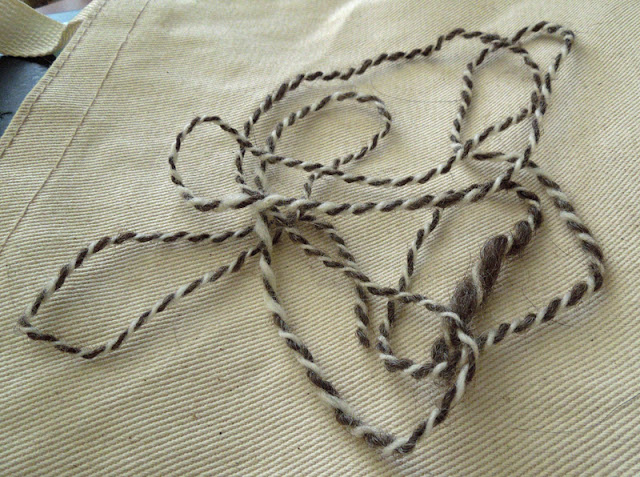 Spun for him at a mill in the Perham area, this skein is like uneven handspun. 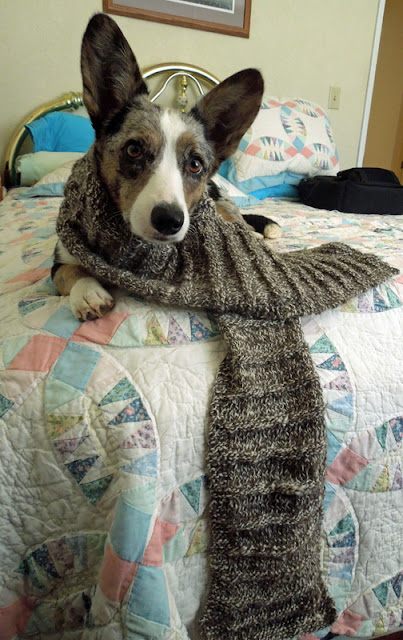 Here Kady models the finished project.  Doesn't it look nice with her brown eyes and brindle points?  This scarf will be going back to Minnesota to warm a cold head in winter and/or to show potential customers just how it knits up.  I could be ordering several skeins of my own.

Knitting is a good pastime while RV-ing.  Tom does the majority of the driving - though I can handle the rig quite well, if I do say so.  But driving cuts into the knitting time, and the photo-journalling time, so I'm content to let him drive.

On the other hand, it was difficult to keep up with the reading schedule.  I'm not exactly meeting the one-book-per-week goal for the year.


While on vacation, I finished:

#19 Jane Goodall's Through A Window which was a Kindle Daily Deal.  Of course I have seen Jane on programs and read some of her articles, but I had never read this book.  While true and still scientific, it reads as a narrative of the lives of the chimpanzee tribe.  In particular it is the story of mothers and daughters.  Read it if you haven't.

#20 Water For Elephants by Sara Gruen.  The movie is good.  The book is better.  It made me cry.  And I was able to borrow it for free as an Amazon Prime member.

After coming home I read (#21) John Irving's latest: In One Person.     He is always a favorite of mine, and almost could make you like wrestling.  It's a very worthwhile read.

And now I'm finally working my way through (#22) Stieg Larsson's Girl with the Dragon Tattoo.  Once again, I saw the movie first but in this case I think it helped.  Of course the ending won't be a surprise this time.

So with 20 weeks left to go in 2012, I should at least be able to reach 40 total.  I admit that I've also started several books that I have put down after a chapter or so.   Life is too short for spectacularly bad writing.  Tom also has many books in the political vein which sound interesting when he tells me about them, but I use reading as an escape, as a way to live other lives.