Life in the New Rig - and the Yuma Vortex

It's been our rolling home-and-office for three weeks now; time for an official update.

The first few days were spent at Shiprock RV Resort in Apache Junction.  We were close to La Mesa RV in case anything went wrong, and besides: they gave us two free nights.  Nice park, but a too civilized and too "RV Park" to make us want to stay longer.  We spent time arranging closets and compartments and shopping to fill our residential-sized refrigerator then left for Tucson.

Goodbye to the Superstitions.

On the drive down to Tucson. 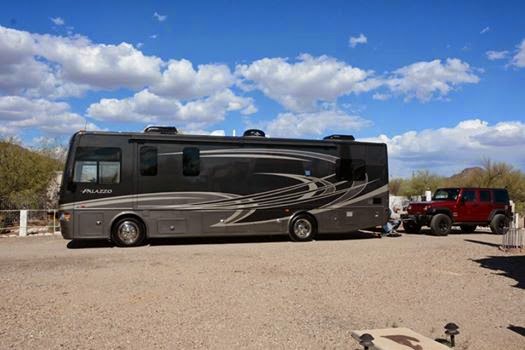 Thanks to Lynda for this great picture of us pulling into the Bar J in South Tucson.  Aren't we pretty? 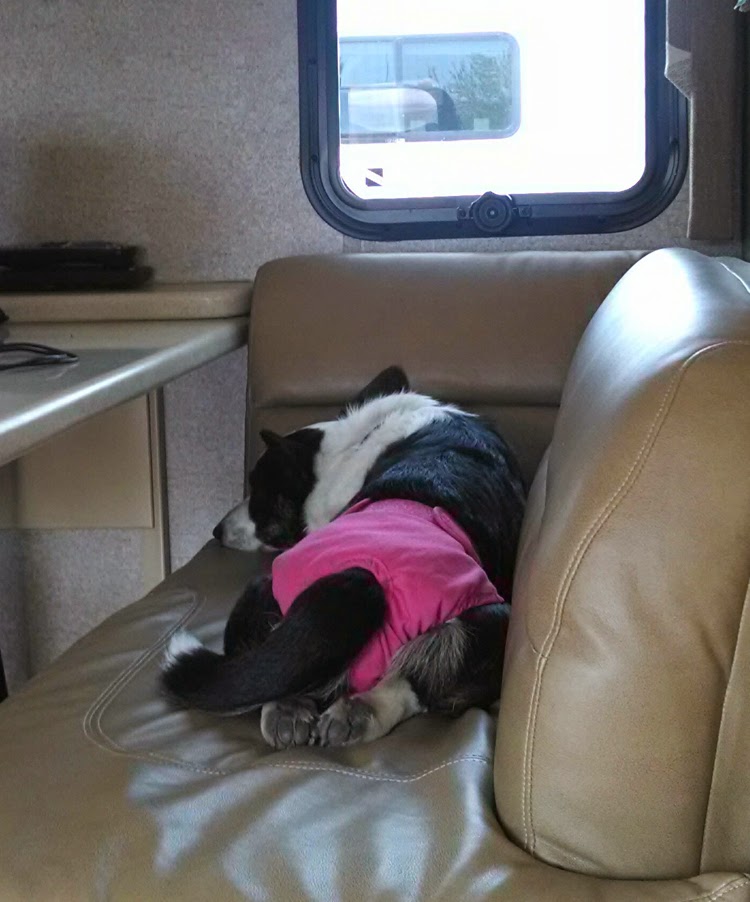 Dora approves of the dinette (yes, she was in heat). 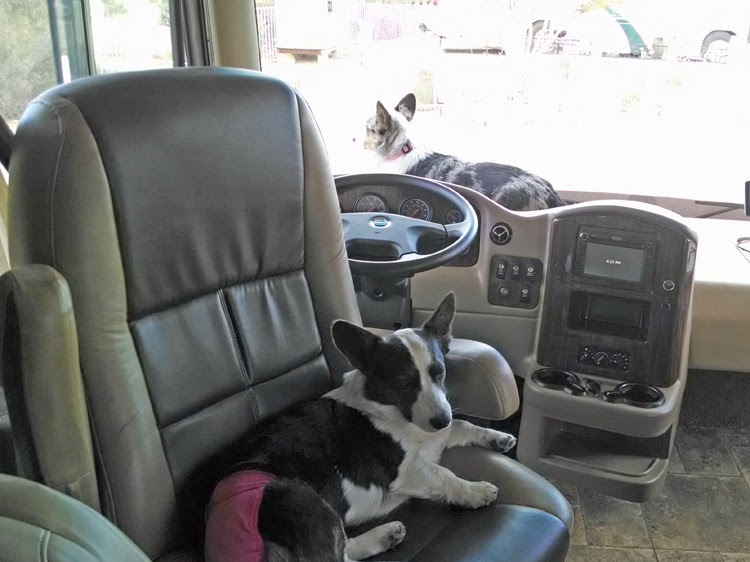 She also approves of the captain's chair.  Sister Kady prefers the dash.  I thought the dogs would enjoy the window over the couch as they do back in Oregon. 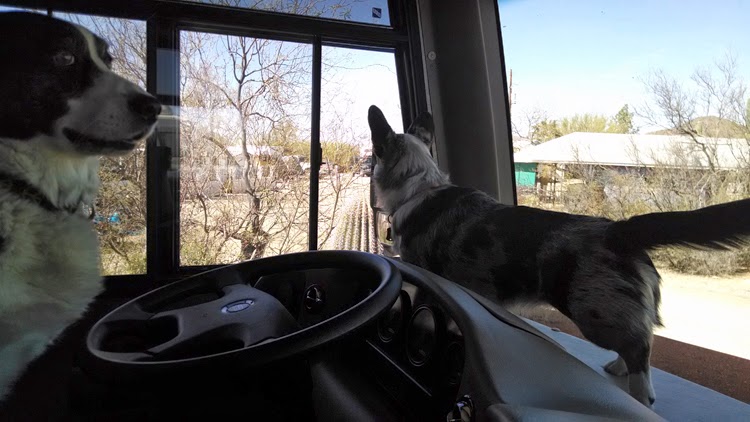 No, the dash wins.  It now sports a blanket to aid in their comfort. 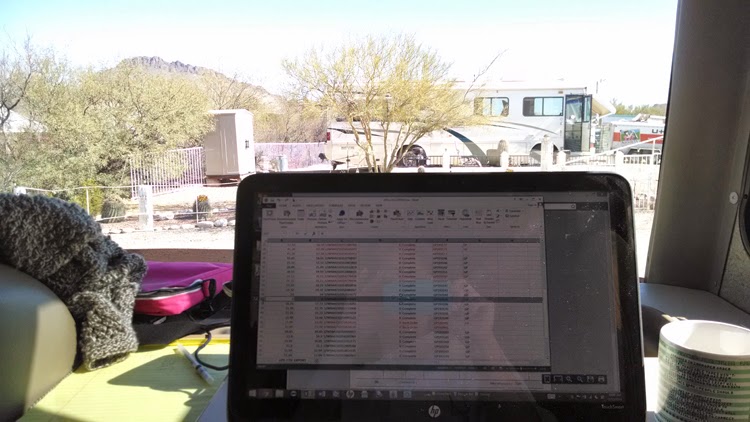 The view from my "office window" at the Bar J.  Great little park: just thirteen spaces.  No frills.  Free laundry and hang your clothes on a line to dry.  Spacious sites, dog yard with shade. 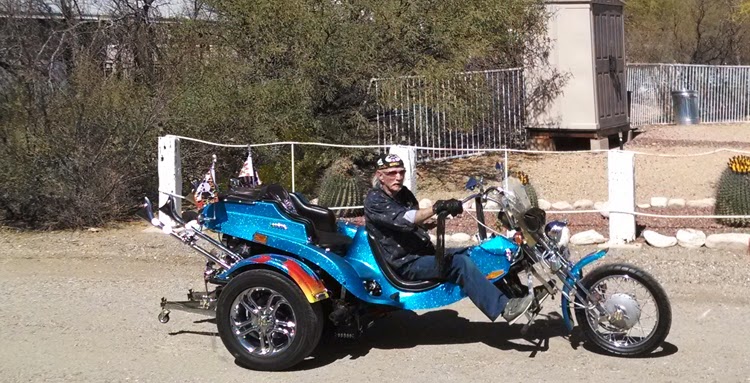 Owner Paul Murray is a man of many talents.  He has built everything in the park himself, including the iron work.  His recent hobby has been this beautiful show bike. 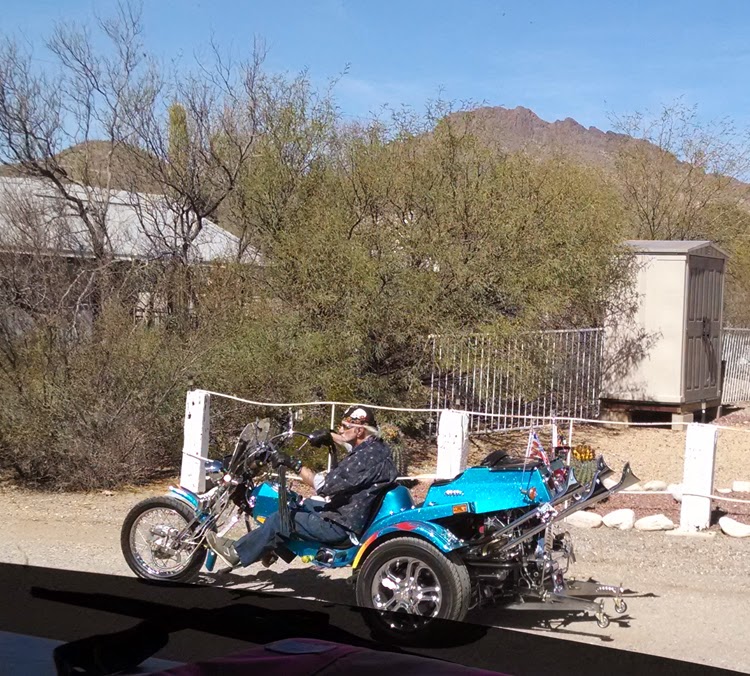 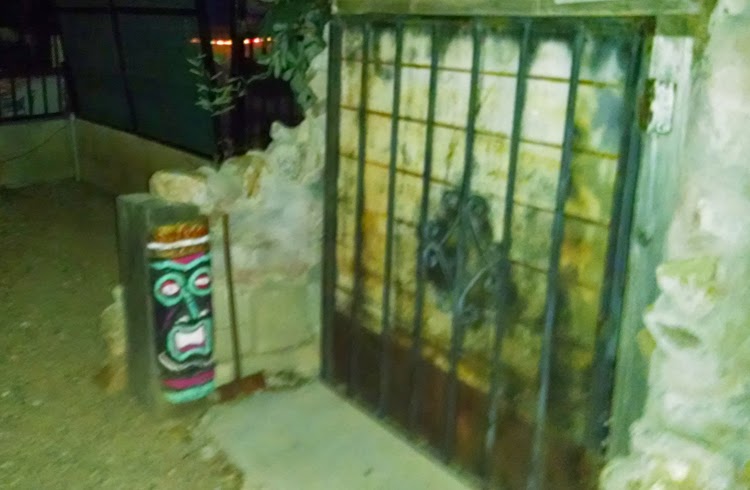 I made these pictures at night.  For better ones, see Lynda's blog entry Our Route to Tucson had a few stops from 2013. 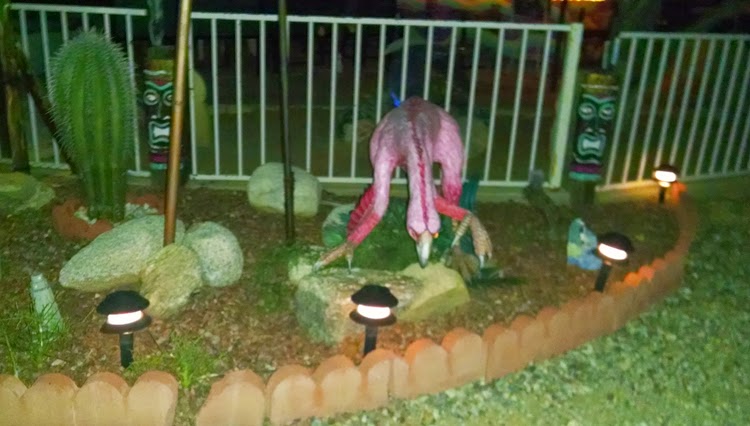 Paul quipped that he needs to rename it the "Jurassic Tiki Bar" due to some more recent additions. 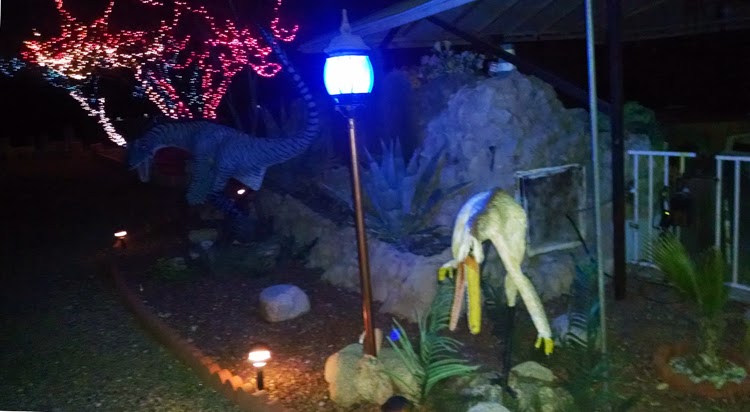 The trees are decorated in Red, White, and Blue lights.  That way you "don't need to change them for different seasons." 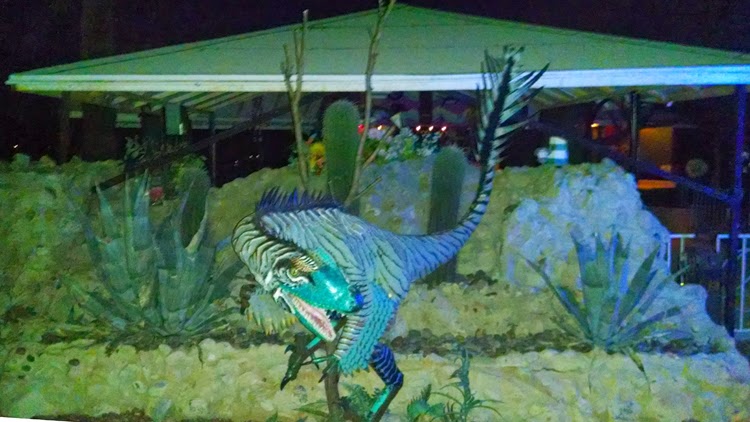 The Bar J is out in horse country, near Tucson Mountain Park, Old Tucson, and the Desert Museum.   We will be spending more time here next winter, guaranteed.

Nothing went wrong until we hit Yuma.  We shall count the ways in which the bad-luck vortex that is Yuma struck us.

1) Tom's 3-week-old Moto X broke.  The screen would not respond to touch.  After hours on the phone to Verizon, they were shipping him a replacement.   When he got the e-mail confirmation the next day: they were shipping him a Galaxy 3. What?  Replace a brand-new state-of-the-art phone with a two-year-old refurbished obsolete one?  If he wanted a Galaxy 3, he would have saved his pennies and just bought one in the first place.

More phone calls (this went on for several days) and finally contacting Motorola, a Moto X was finally also sent and he is to return the Galaxy 3.  It gets better: when he opened the box for the Galaxy 3 it had no back and no battery.  Because you are supposed to use your current battery and back for it.  Uh . . . he didn't have a current Galaxy.  Whatever.  Thumbs up to Motorola.  Thumbs down to Verizon.

2) We pull into the Kofa Ko-op RV park and they weren't too thrilled about our four dogs (oops, two-dog limit).  We were told to only walk two at a time and space them out so nobody would notice.  And not to tell anyone.  Ok . . . But then as Tom was backing the rig into our space, something let loose and pink hydraulic fluid started pouring out from underneath.  Not realizing the problem, Tom put the jacks down.  Call La Mesa in Yuma as we're still in our 15-day-fixit-period.  They say they're really busy and shutting down in a week.  Call La Mesa in Mesa.  Get a call back from La Mesa in Yuma that they'd get someone out tomorrow (Friday).

Jared from La Mesa (nice guy from Spokane, BTW) showed up at 8 a.m. the next morning.  It took three trips, another helper, and until noon to get the jacks retracted.  He asked us to bring it down to the shop at 1:00 so they could take a look at it.  So just before 1:00 we left Kofa, unfortunately leaving a trail of fluid through the park as we went.   Left the RV at the shop, visited the Verizon store .(This was at the very start of the phone debacle, where Tom found that in the store they could also only offer him a Galaxy 3 as a replacement.) 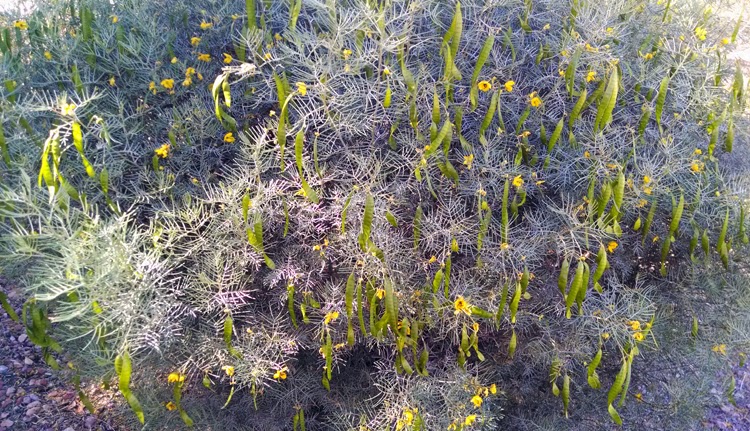 There were pretty flowers in the shopping center parking lot as the dogs and I waited.  But then I received the call on my phone (forwarded from Tom's number) from Kofa.  Wherein we were scolded for making a mess in their park which they were trying to figure out how to clean up, and basically asked to please not come back.  Sigh. 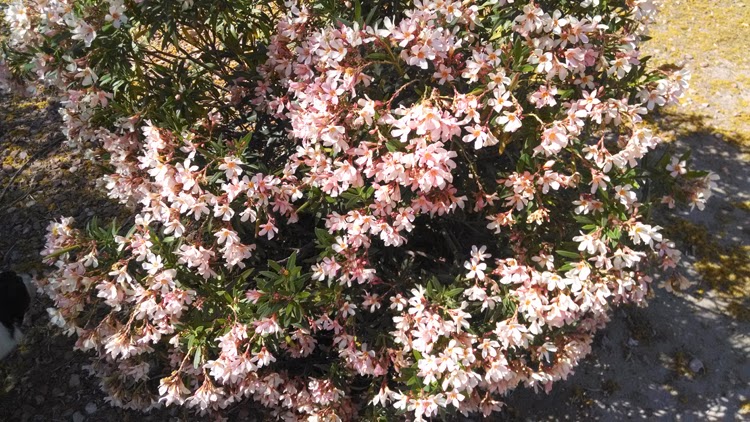 Being late Friday afternoon by now, we were not getting the problem fixed until Monday.  Tom asked the service tech where we could stay for the weekend, having been evicted, and the workers there stay at Blue Sky RV park during the season.  Technically they also have a two-dog limit, but like most we have found were willing to work with us.  Truthfully, our dogs travel well and are quiet (remember that one has had modification to obtain that truth).  Not a thrilling place to spend the weekend; right on Interstate 8.  But there have been worse and probably will be again.

3) What next?   We used the convection part of the microwave/convection oven for the first time.  And the next morning, we pushed a button on the microwave.  First button pushed. But no subsequent buttons responded.  Unplugged it, plugged it back in.  Same thing.  We tried multiple times with same result.  Reading reviews on-line, circuit board failures seem rampant with the model.   La Mesa recorded the problem for us (within the 15-day period) but did not have the time to remove the unit, send it for repairs, reinstall it.

Update: after shopping for a replacement and not finding one locally in Palm Springs, Tom decided to plug the unit in and give it one more try.  And it works.  I attribute it to the fact that we are no longer in the Yuma Vortex.

4)  Monday morning we took the coach in bright and early to the La Mesa shop.  Then we took a jeep ride out to the river because there must be something better around Yuma, right? 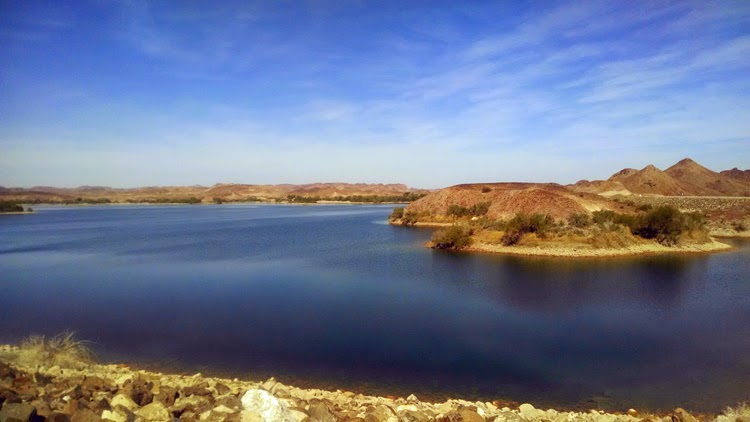 And there is low-cost long-term camping on BLM land near the Imperial Dam. We might try that some time.

Back to the shop: the good news was that the leak in the jack system was due to a misrouted hose that rubbed against something sharp on the chassis and that freight-liner guarantee covered it.   It only took a couple of hours to fix and was done by the time we got back at noon.  But . . . 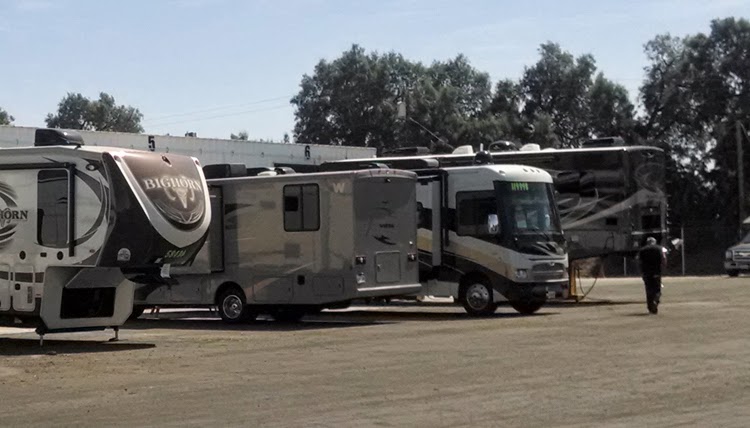 4) They didn't want to call us and tell us.   Our rig was still up in the air because the hoist broke while it was up there.  A repairman was coming to fix the hoist. They didn't exactly say, but he had to drive from Phoenix.   It was about 3:30 by the time they got it down and we were too exhausted to drive to Palm Springs so headed back to Blue Sky for one more night.  We missed the Saint Patricks Day festivities at Two Springs.

5) Monday night Kady started acting sore, walking hunched, and occasionally crying like something bit her.   Then she would run to me and look up in my face begging me to make it better.  She stood by me (or laid on me) when I was sick so now I needed to take care of her!  I've been on this merry-go-round before and knew that her back was bothering her.  Gave her ascriptin for temporary relief.

6) Yuma tried one last trick on us Tuesday morning: the winds started up and we fought our way through a dust storm.  I was pretty adamant that we weren't spending another day in Yuma! 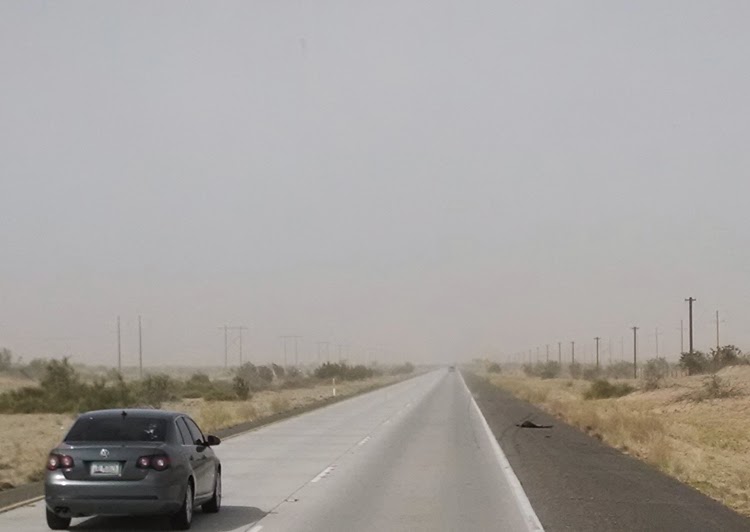 On our way here, I called mom to make Kady an appointment with her vet.  Ran her in to the Animal Clinic at Desert Hot Springs as soon as we got to town and the nice Doctor Kip Madsen gave her a shot and a bottle of Metacam to take home.

We've been here at Two Springs for the week, working a little, relaxing a little, going out to dinner and/or cooking here visiting mom. 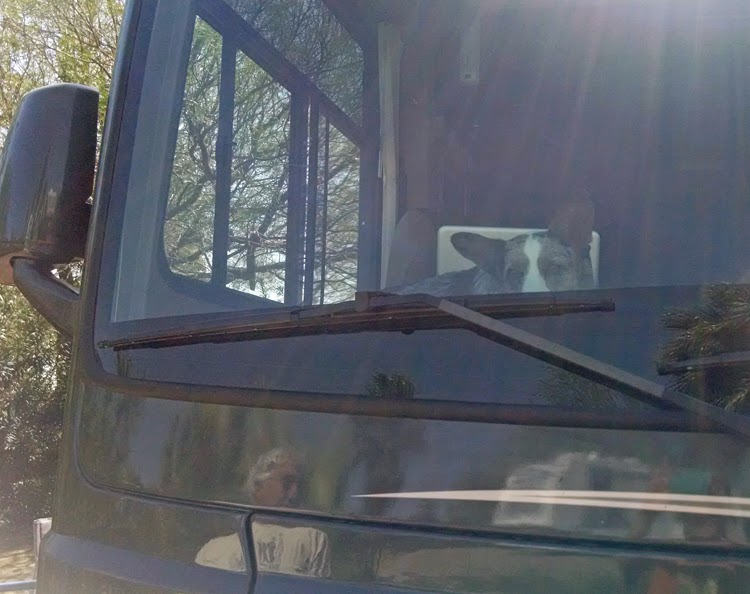 Kady lays on the dash and watches for us to come back.  She says that she feels much better now, thank you very much.