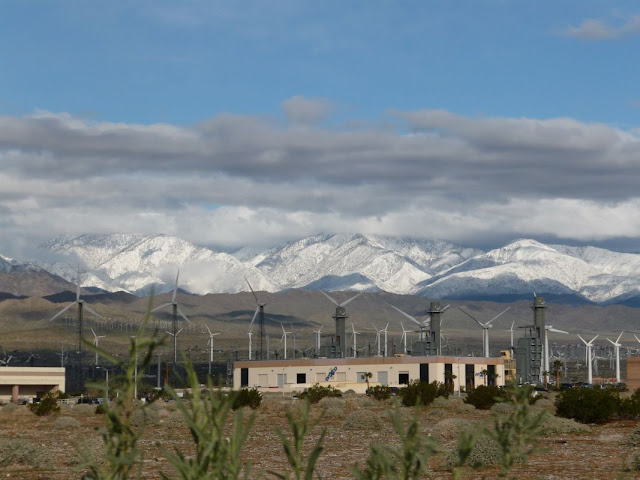 Last morning in Palm Springs.  Yesterday's rain brought even more snow to the mountains.  Beautiful.
From Palm Springs, we drove down through the Imperial Valley, past many fields of vegetables with a cloying smell of pesticides clinging to the back of our noses.  I didn't take any pictures to speak of as the scenery wasn't all that exciting.
Just before hitting the Mexico border, we turned east on I-8. 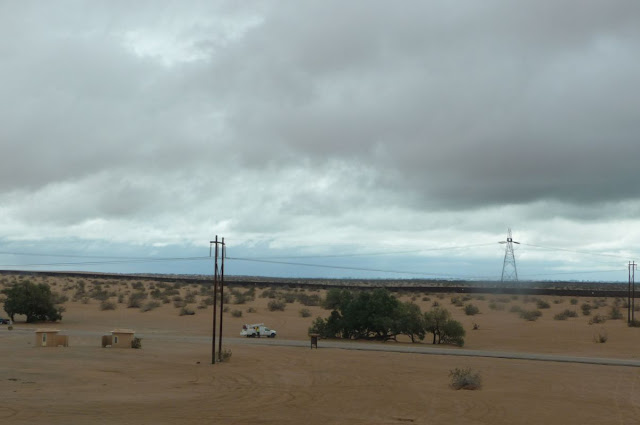 I thought that I'd provide a couple of pictures of the infamous fence between the two countries. 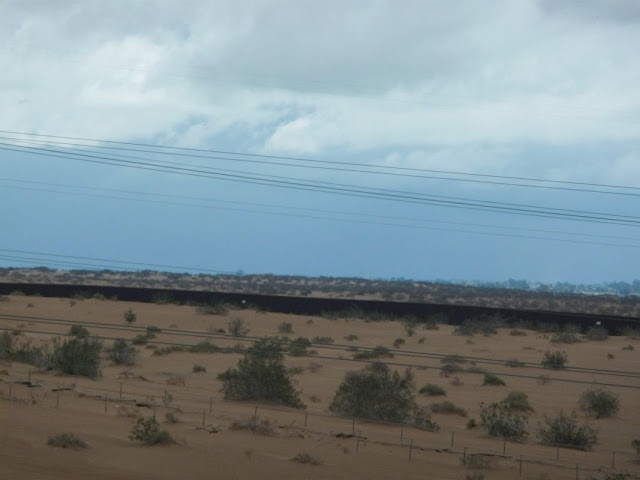 Beyond that wall lies Mexico.  The border patrol was much in evidence, with cars every few miles in this stretch, ready to stop suspicious vehicles. 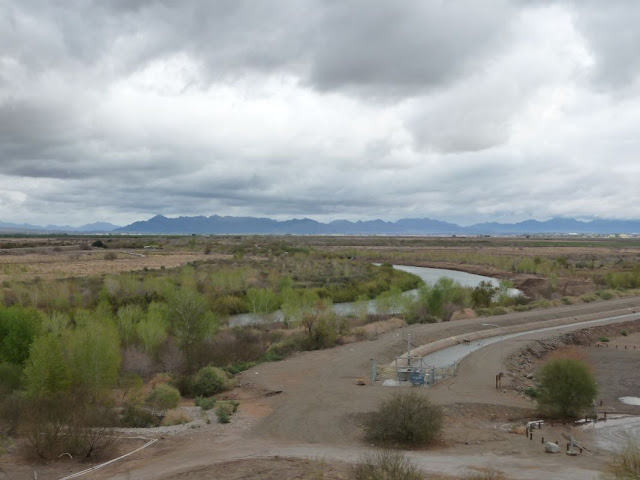 We stopped for a brief time in Yuma, and we have pictures of the old Territorial Prison for a future post.  I took this picture of the landscape to the north of town from the old guard tower.  Yuma is not nearly as pretty as Palm Springs and (hard to believe as it may be) there are even more "snow birds".  Thousands of RV's.  Tens of thousands.
(Mom & Dad: You're right.  Palm Springs beats Southern Arizona as a place to winter)

Not far east of Yuma it was our turn to be stopped at a border patrol check station.  Tom suggested that I not take a picture right up at the check point as the federal agents might frown on it.  Anyway, it appeared that they were checking for drug-runners rather than unauthorized guest workers, based on the Malinois that was checking out each car.  Nice-looking Malinois.  But the agent didn't seem like he really wanted to discuss dogs, outside of asking how many we had with us (two) and what they were.  To which answer he replied "Never heard of those before" and we were passed through without further inspection.
Another mature woman in a loaded-to-the-brim Subaru wagon was not as lucky and went to the full-search lane.  Tom pointed out that she had Colorado plates and the direction she was going she could have been smuggling drugs home.  I guess it makes sense that someone wouldn't be taking drugs back to Oregon by heading east from Yuma.
Traci: you were right about there not being much in Southern Arizona.  Outside of quite a few really large feedlots, that is.
I had thought that we could stay in Gila Bend, which is the junction of I-8 and the highway that goes south to Organ Pipe Cactus National Monument.  But when we got to Gila Bend . . . well even the Best Western looked kind of scary.  As did the only two restaurants which were not fast food.  What to do?  Ask Garmin.  Next better places to stay are north off I-10 in Goodyear. 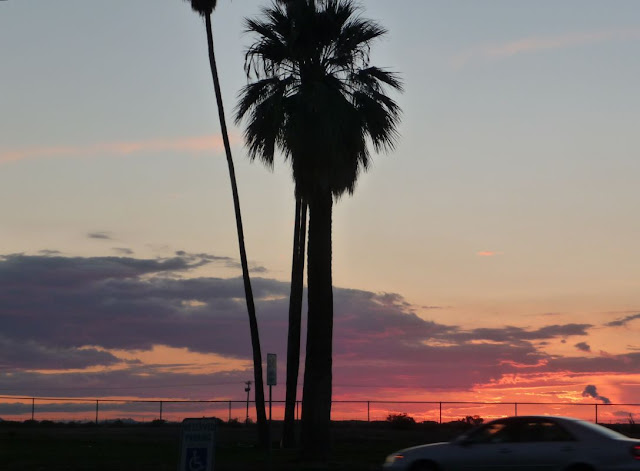 So tonight we are in a very nice Best Western in Goodyear, just west of downtown Phoenix.  Kind of a nice change after 4 nights of Motel 6.  I'm not sure what our plans are for tomorrow; if we'll backtrack to Organ Pipe Cactus or if we'll do some touristing around here.  So many choices . . .
Labels: Arizona, California, News and Politics