No, not Arctic: Artic. 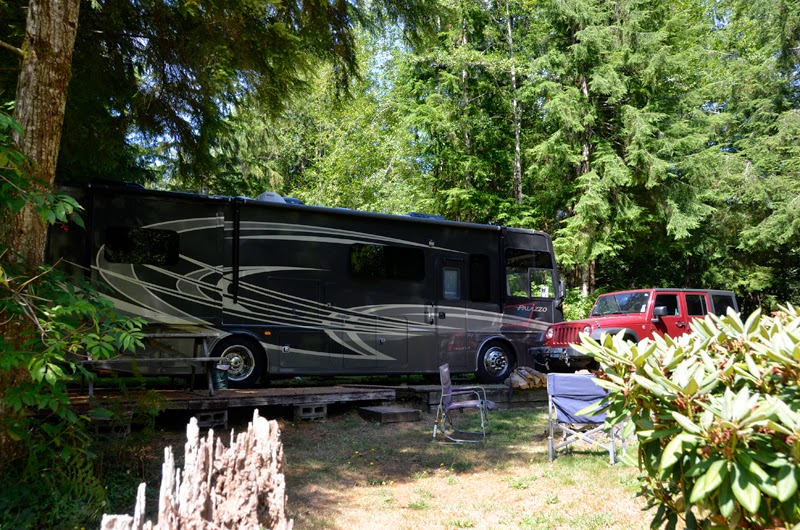 Artic RV Park is not your average private RV park experience; it's a park, not a parking lot.  There are nearly as many tent-campers as RV's at least on the weekends.  Bicycle and motorcycle campers were frequent, and there was even one long-distance-walker camper. 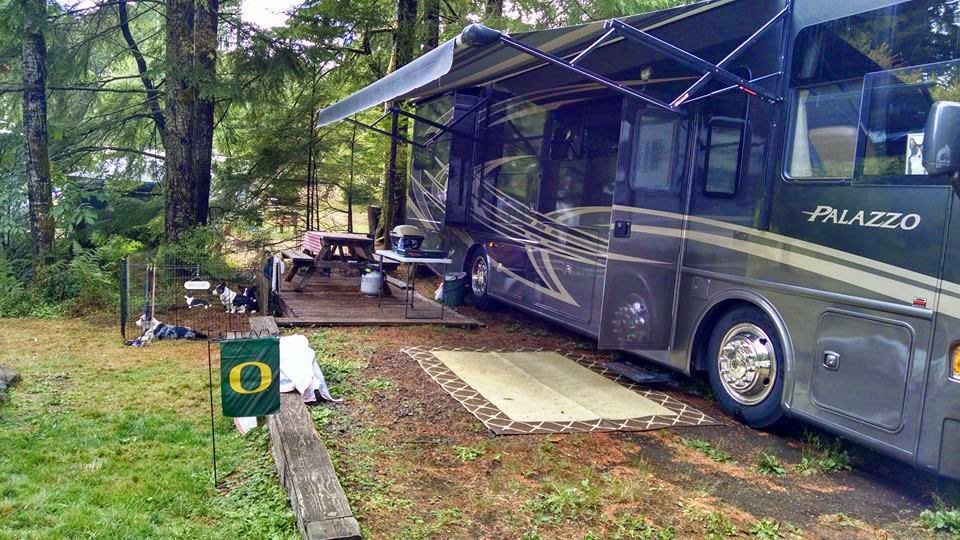 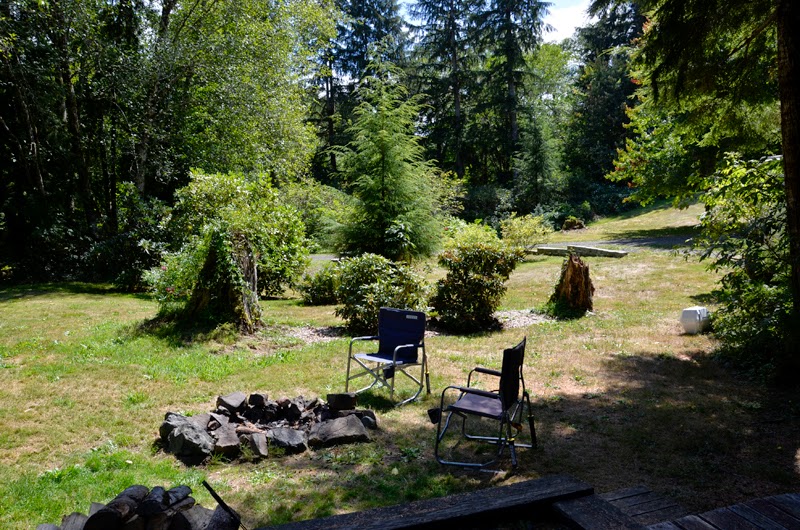 The campsites are large.  After this picture was taken our friends Gary and Louise visited for several nights, with a tent pitched to the right where you can see our tailgater. Western hemlock trees overhung the RV, so the tailgater was necessary to be able to watch the Duck's first game. 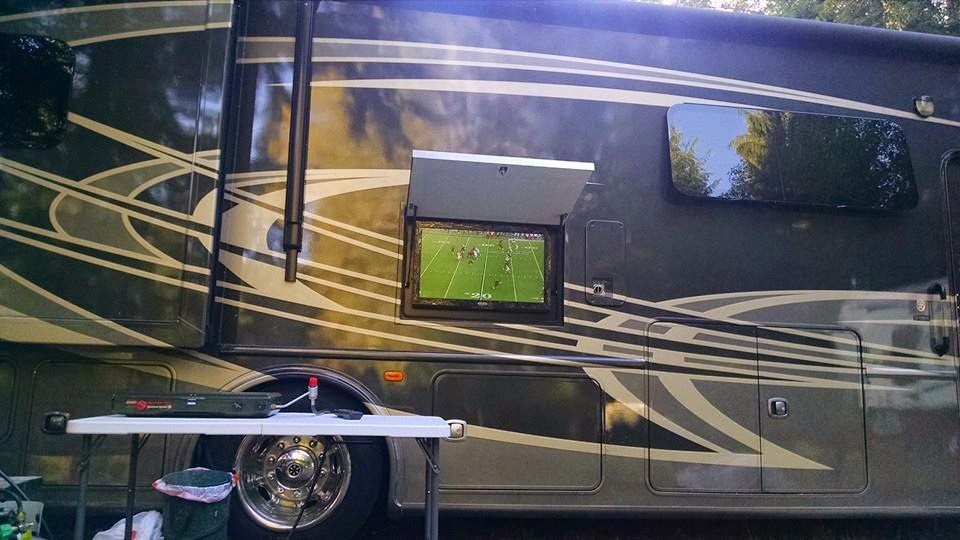 We're not always "that kind of people", but the neighbor attending a Labor Day Weekend family gathering was TV deprived so we shared.

I missed getting pictures of the fantastic garden, so check Lynda's blog for those. I do have pictures of the nature-trail along the Little North River.  I walked it several times while we were there, both with Tom and with Louise. 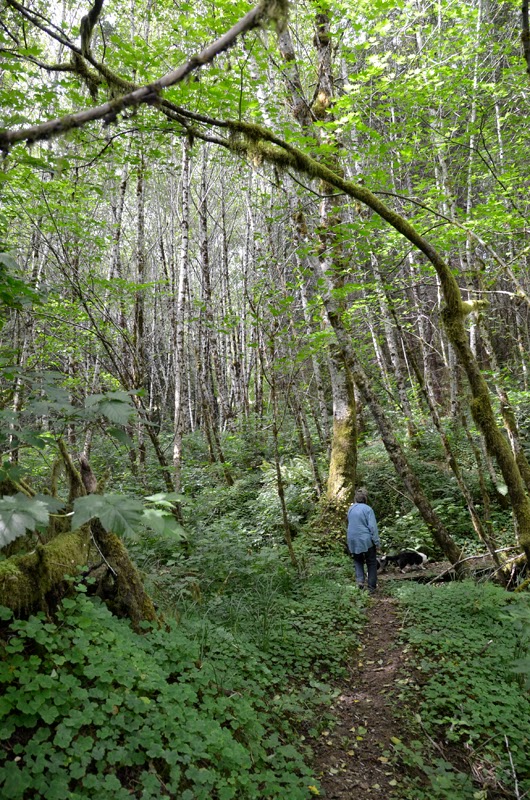 On the path with Dora and Kady. 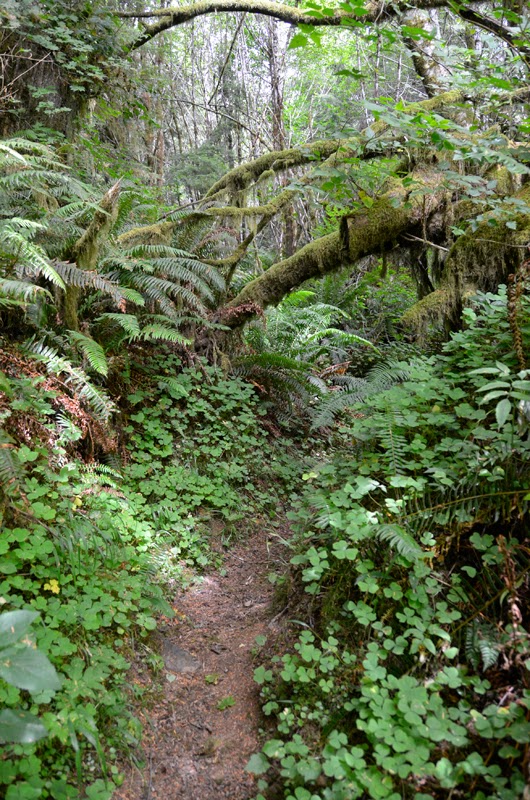 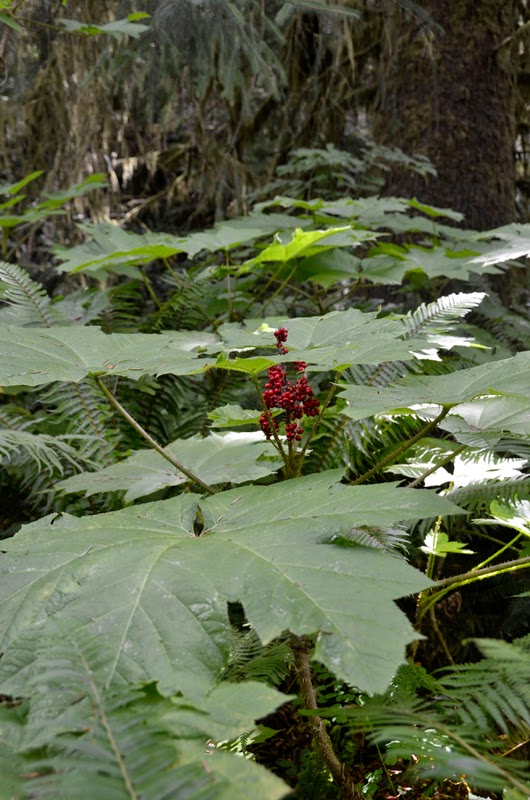 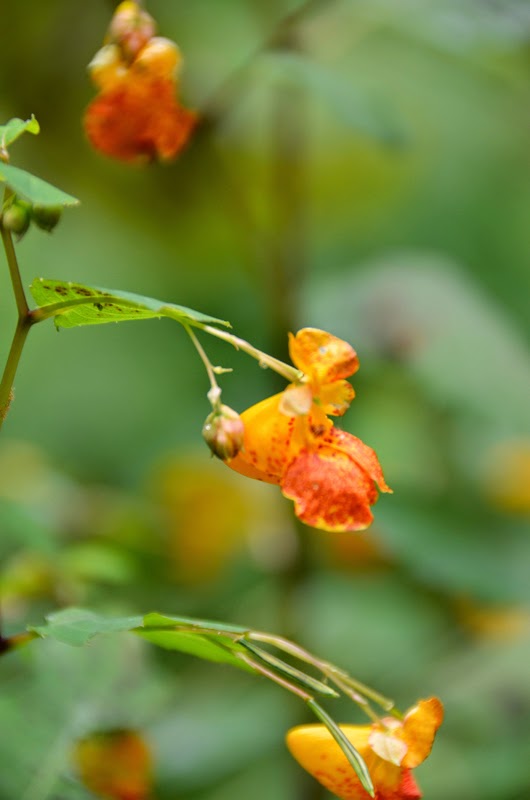 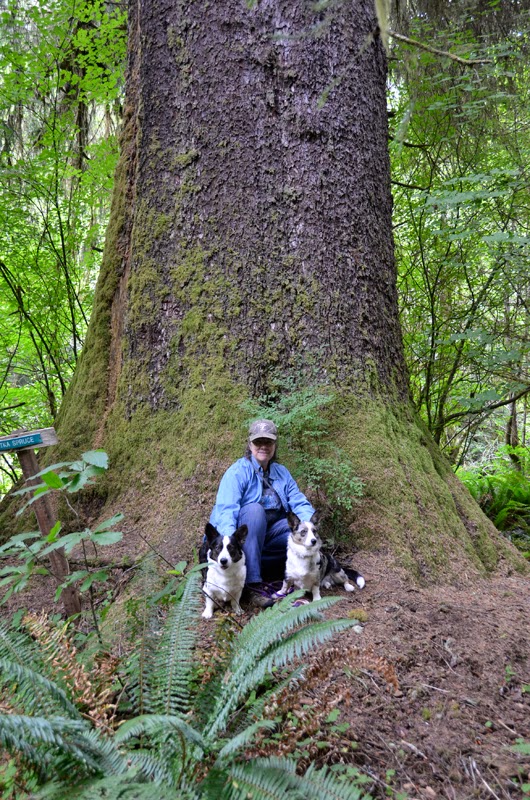 The centerpiece: an ancient Sitka Spruce 10' in diameter. 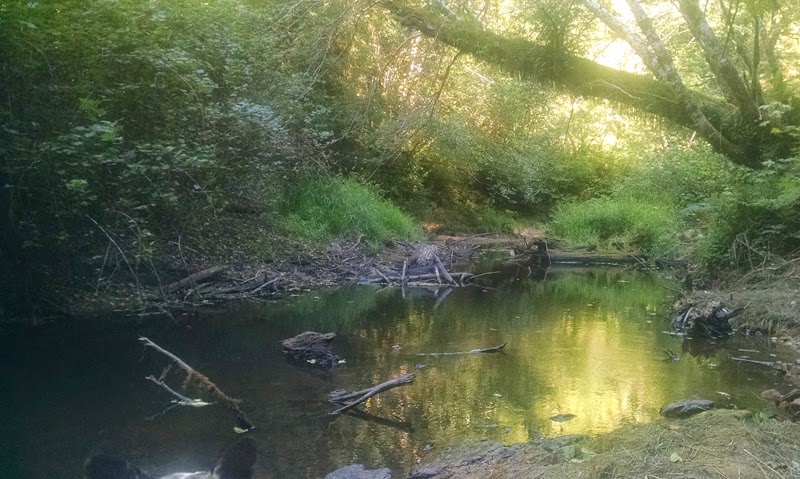 Swimming hole on the river.  Dora and Styx are the only ones who truly enjoy swimming.  The rest of us sit and enjoy the peace.  Note: there is road noise from Hwy 101 in the park but 1) it quiets down at night and 2) you get used to it.  The upper campsites by the road are noisier than the lower campsites where we were.

Besides the garden, the bounty of the park inclues: 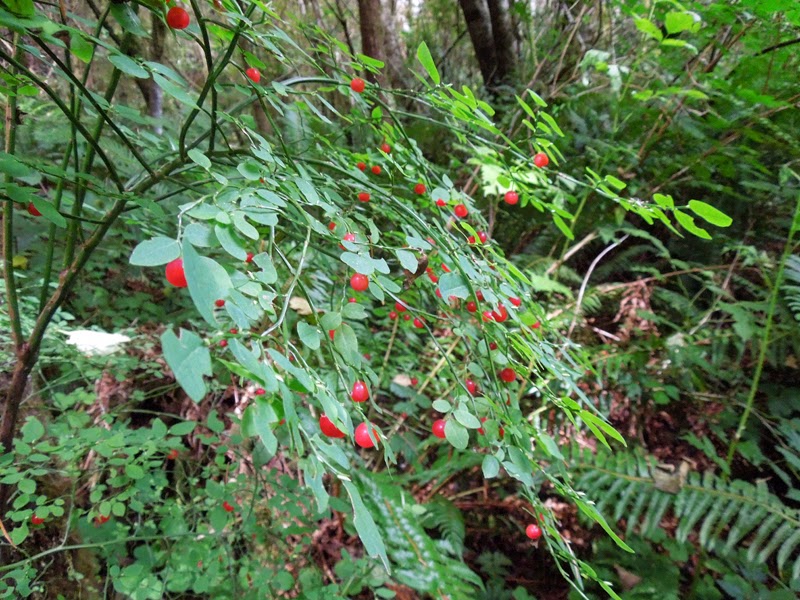 High bush huckleberries.  There are also a couple of blueberry bushes near our campsite which we pretty much stripped. 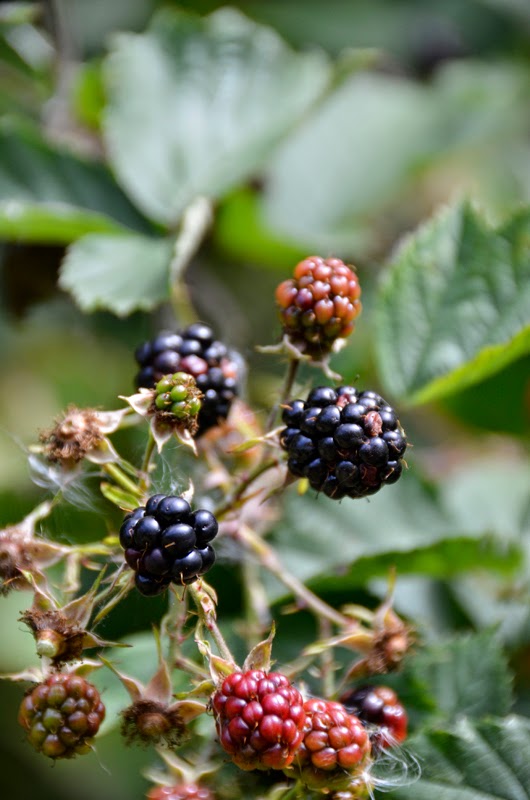 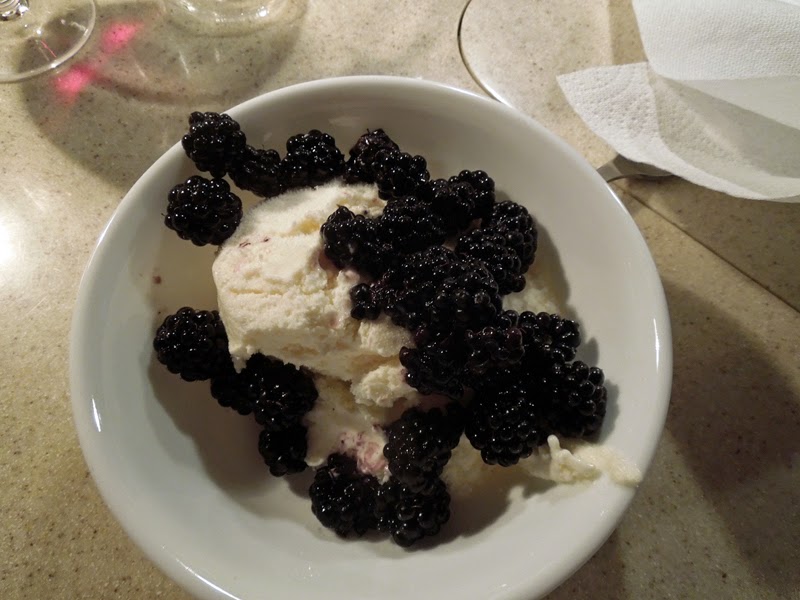 Tom made a cobbler, as did Louise with a batch she took home.  Second batch just went on ice cream.  I like blackberries much better when they are on someone else's property to pick and enjoy instead of on our property to constantly battle. 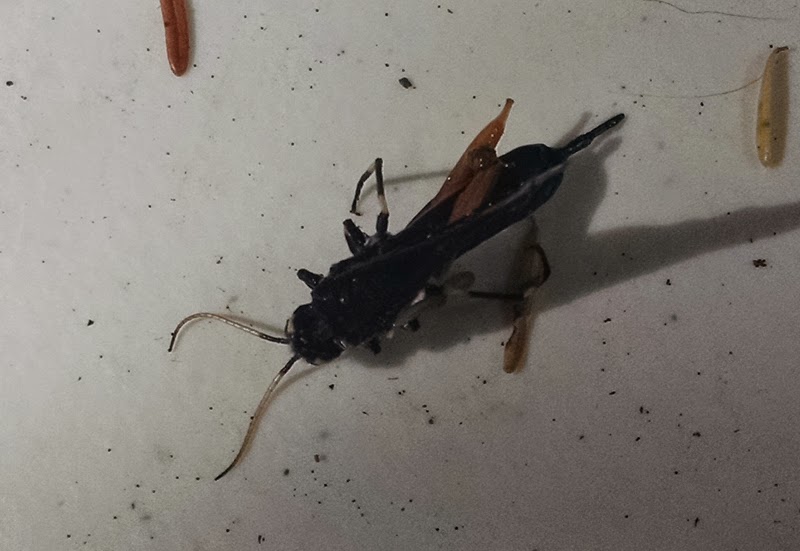 It took us a while to identify these extra-large insects in the campsite as Horntail wasps (non-aggressive).  Finally one drowned itself in the dogs' water bucket so I was able to get a picture.  Its yellow legs and antennae faded overnight.

The owners of the park, Roy and Annie, have done an amazing job with it and their rates are extremely reasonable.  We are always a little concerned about reactions when camping with four dogs (six with the visitors) especially when Roy looked in the ex-pen and noted that "they multiplied".   I told him we "fed them after midnight".  We have a standing invitation to come back next year so all is well.

Not only that: Roy and Tom exchanged e-mail addresses.  They close up the park and snowbird in the desert so we hope to hook up there.  They plan first to make a trip to the Great Lakes and Tom clued them in about some places to visit on the way, such as Itasca State Park in Minnesota.  Annie traded for some "must see's" for us as well, which is how we ended up in Tokeland for the weekend.