The first stop on our vacation trip was to drop off Phoebe and Digger in McMinnville. I already published pictures of the Pembroke puppies. From there we took back roads to Forest Grove and Hillsboro, then followed the Columbia River on Hwy 30.

Approaching the bridge at Longview, WA. 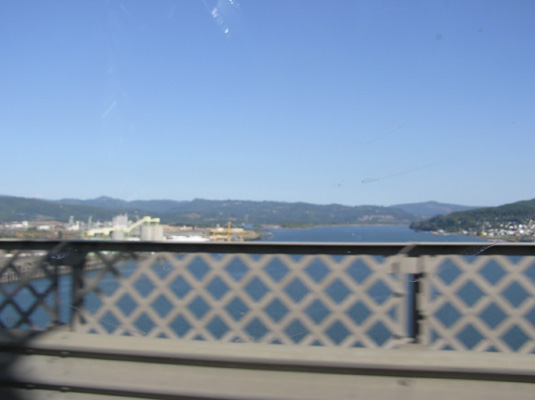 View of the Columbia from the bridge.
Tuesday the 14th was our 36th anniversary. We spent the night in Centralia Washington. Mandy and perhaps some others who have attended the (cold, spring) show there may recognize the view from this fine establishment which accepts dogs. It's been freshly painted since the last time I stayed there several years ago, but it still wasn't up to the standards of the Motel 6 at SeaTac. 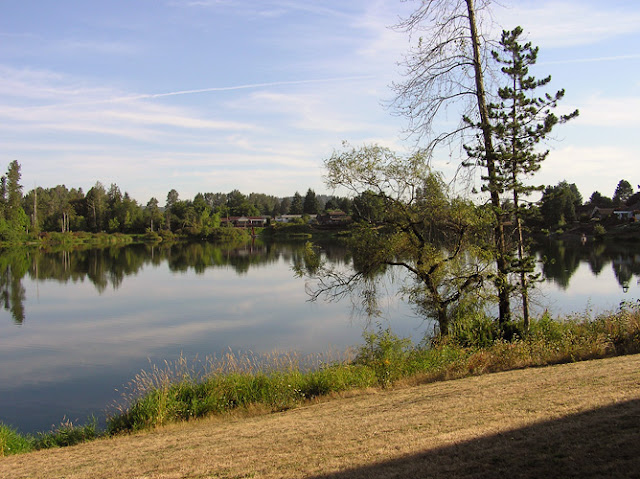 Lake in back of dog-friendly motel. 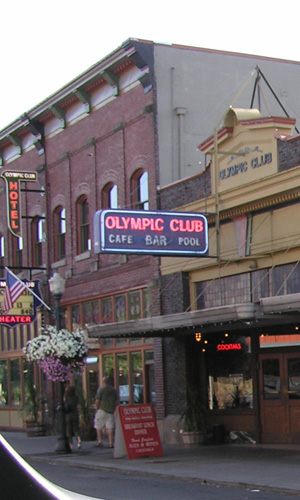 For our anniversary dinner, we went out to the Olympic Club, the McMenamin's establishment in Centralia. 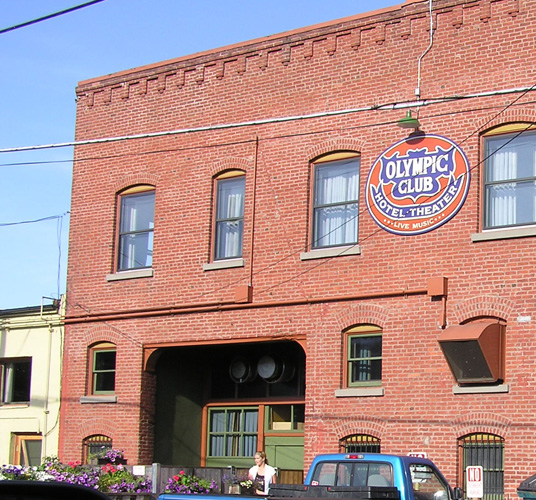 We actually ate out back on the courtyard, which overlooks the railroad station. Things learned: people commute from Seattle to Centralia via train. On August 15th 1971, we visited a volcano (Mt Lassen) on our honeymoon. With time to kill 36 years later, we decided that a quick visit to Mount Ranier National Park was in order. 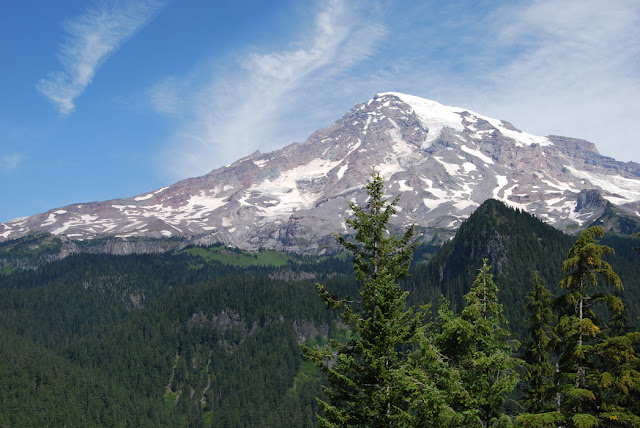 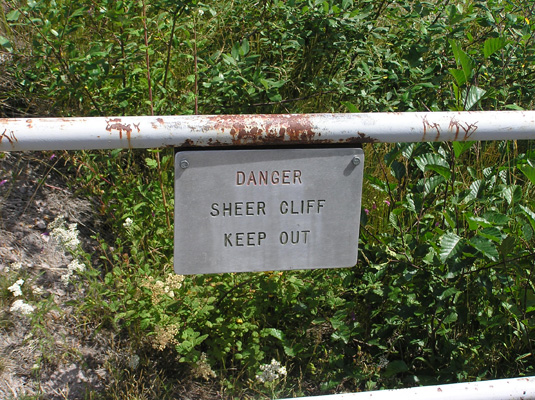 It amazes me when people have to be told this . . . 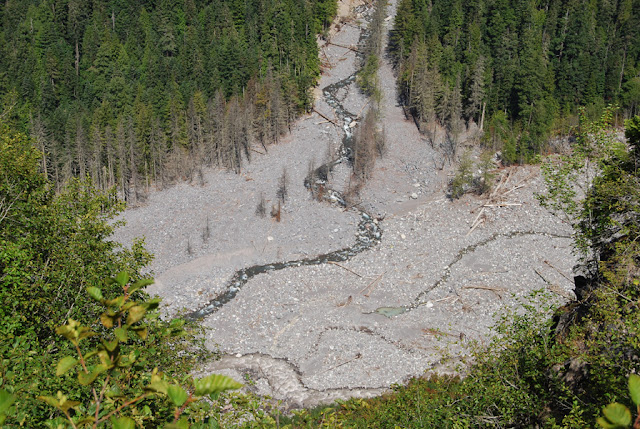 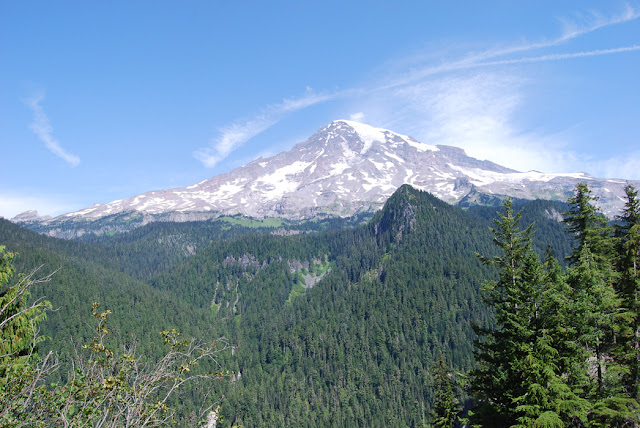 There are many places to stop and take pictures of the mountain. The view is always changing. 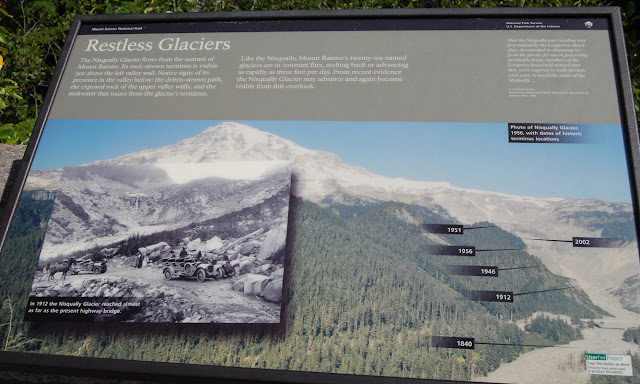 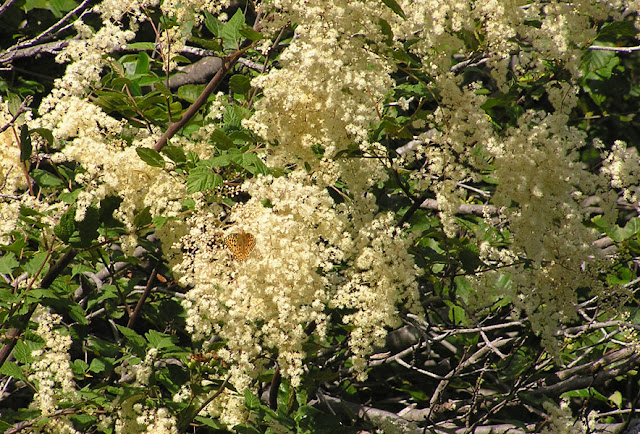 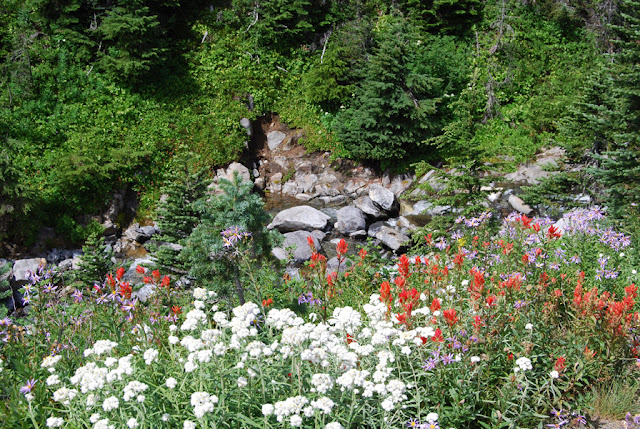 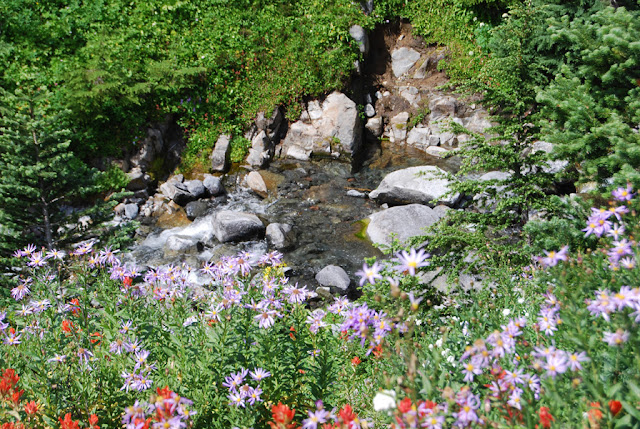 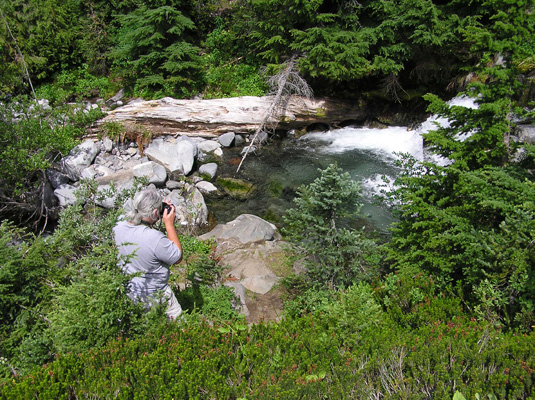 The photographers at work. 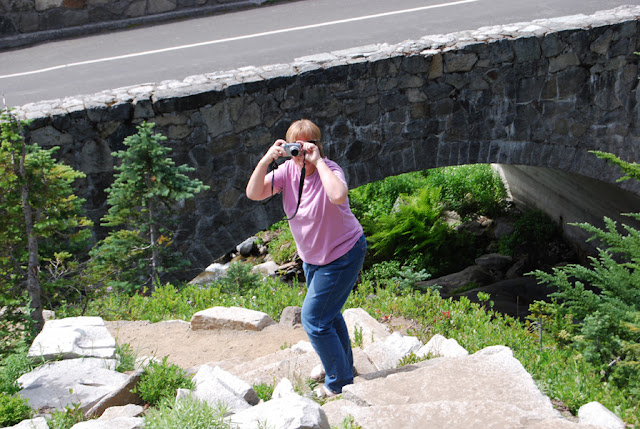 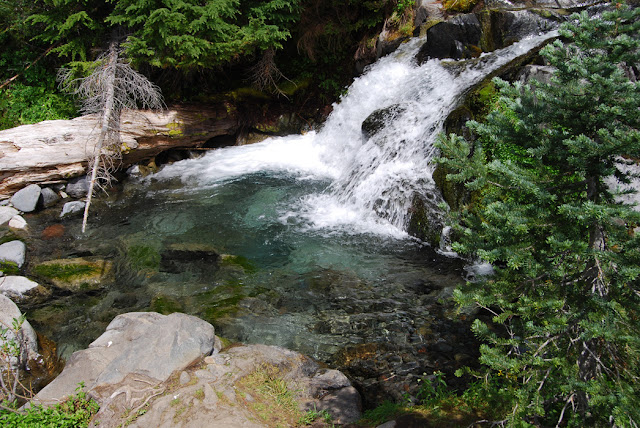 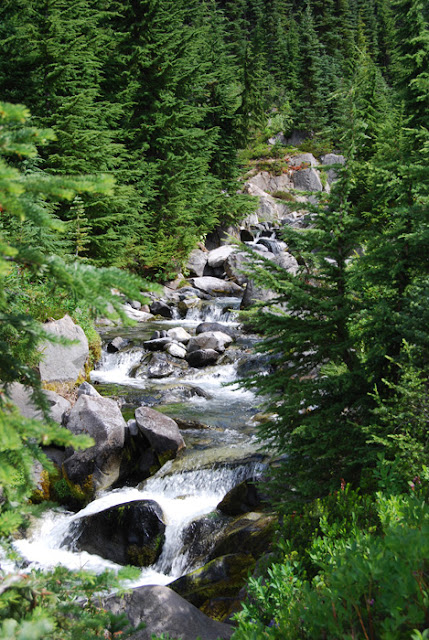 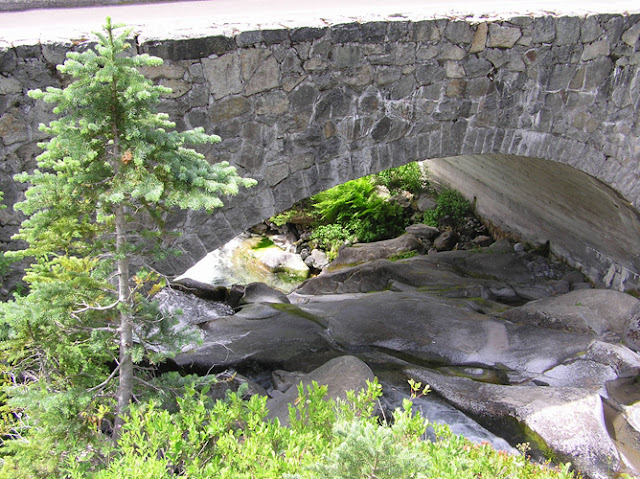 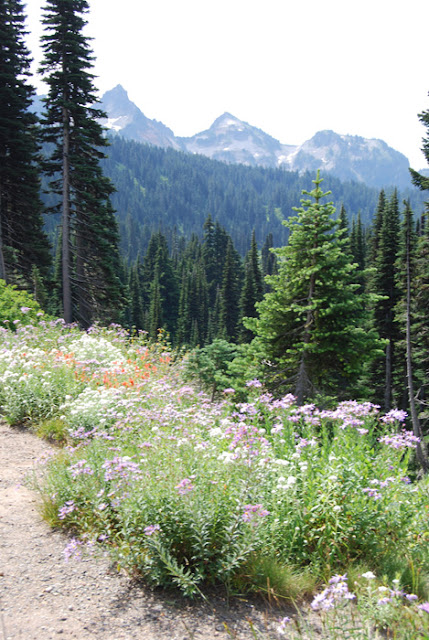 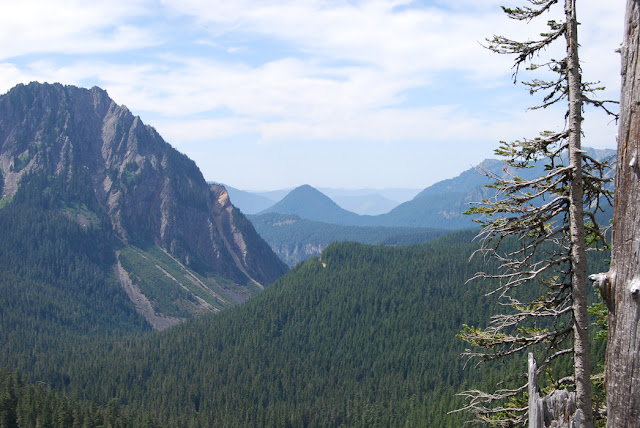 The pictures below are from a deep chasm caused by glacial activity. 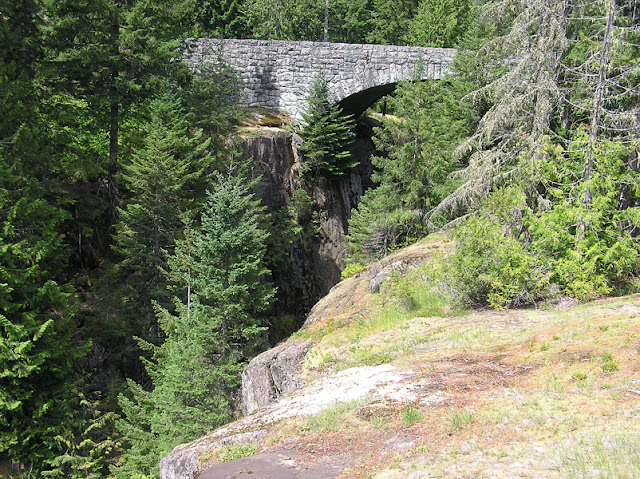 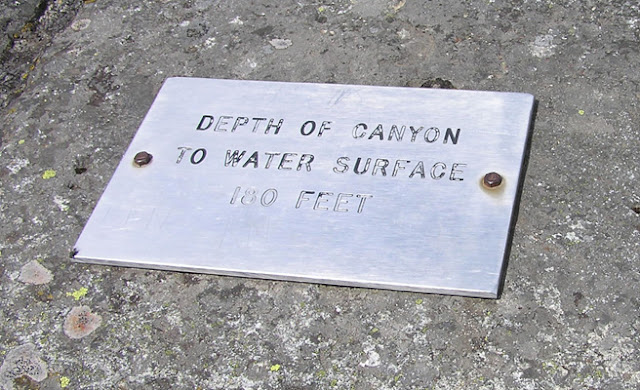 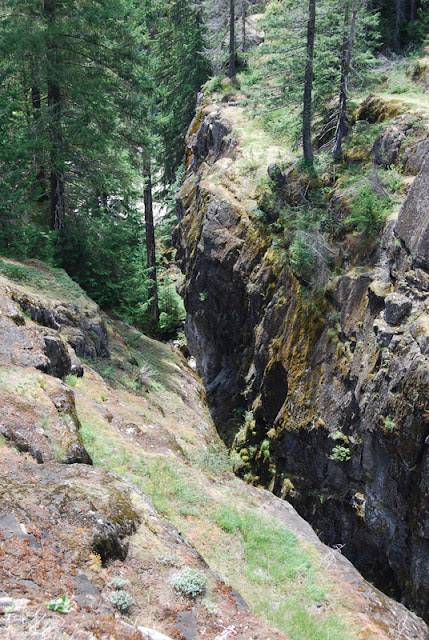 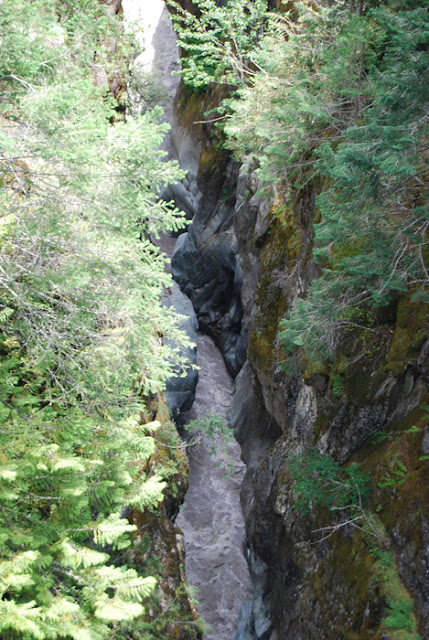 Looking down from the bridge can make you dizzy. 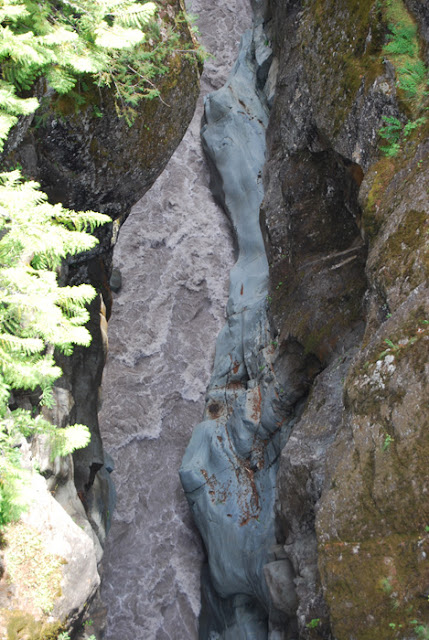 After leaving Mount Ranier, we managed to drive all the way up to Seattle avoiding I-5. It was interesting to see some of the small towns and countryside.
Labels: Food and drink, Geology, Parks and Monuments, Plants and flowers, Washington