Hello again fans, it's me KADY! updating you with all of the fun and other stuff we've been doing.   We've been so many places and dog shows and we have seen our cousins and everything. 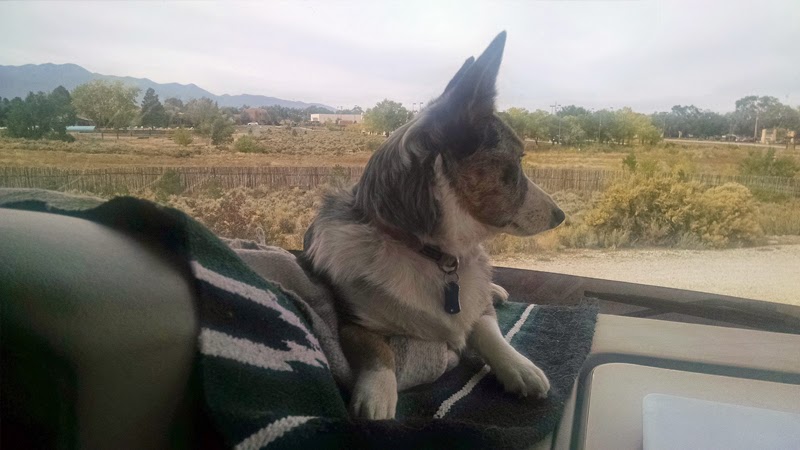 After we left St Vrain and all of the ponds in Colorado we traveled and we ended up in New Mexico.   We stayed overnight at Taos Valley RV Park  which dad said that he could tell was an old KOA.  It was nice and there was a part of it that was pull-throughs for bigger RV's who were just staying a little while.  There was really good dog walking: you can see it behind me down to the wood fence. 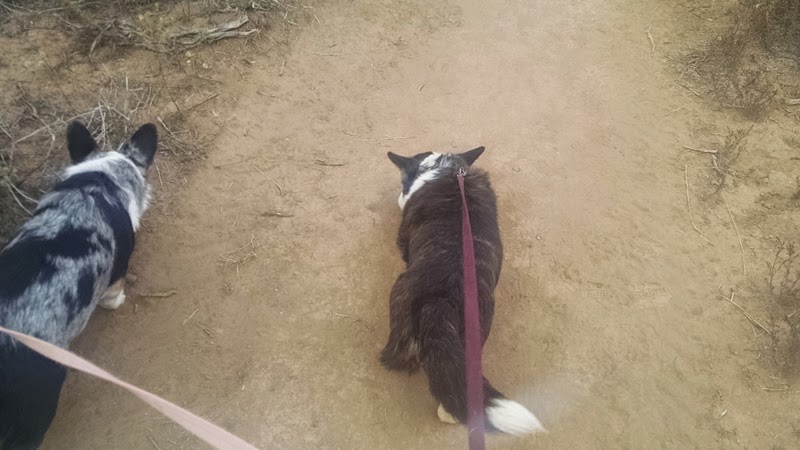 Me and my greedy grandma Alice walked on the paths down there. 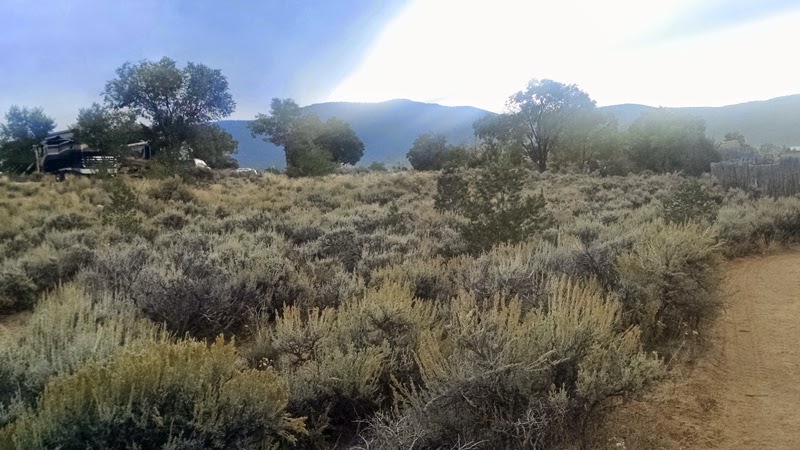 And there was even bunnies there but we couldn't catch them or get a picture even. 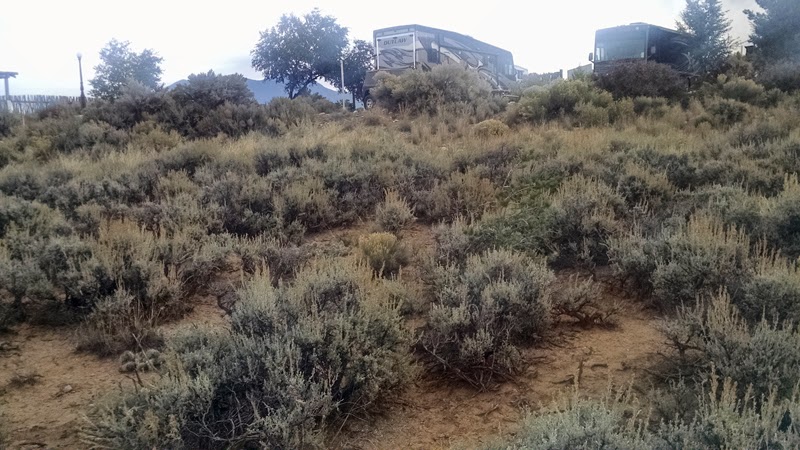 Look, you can see our house up there. 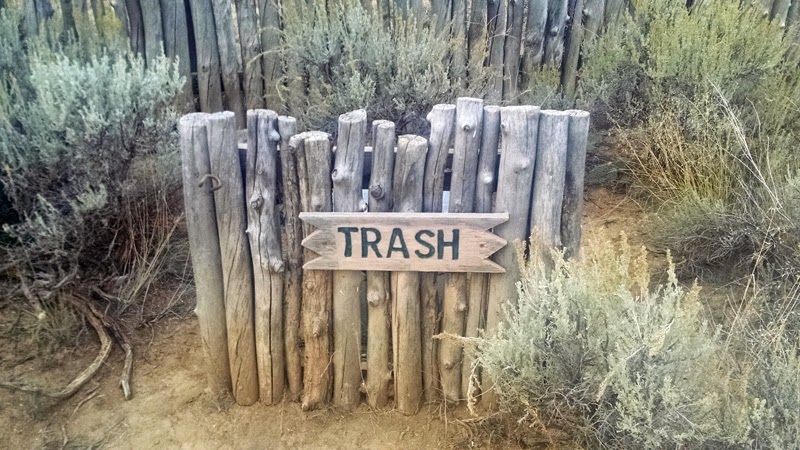 And they even had lots of trash cans for poop down there but some people still didn't pick it up.  We saw one loose dog when we first got there but not the next day.  Maybe he did it and his dog-servant wasn't there to see it.

And then we went to a dog show.

We had our ex-pens set up. 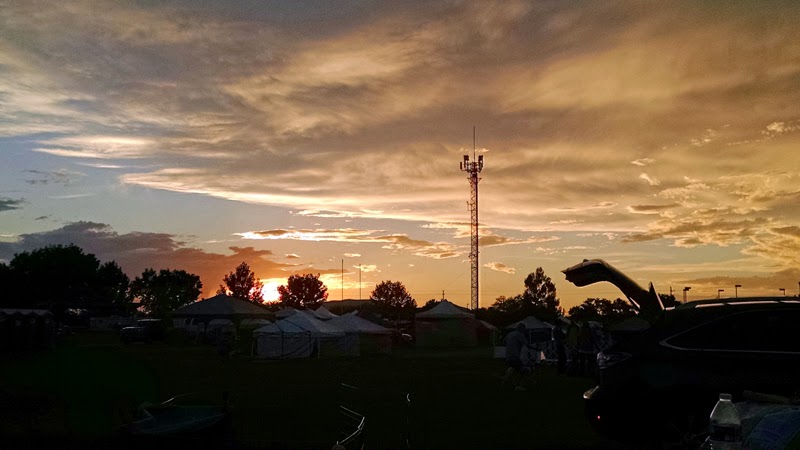 Here's what it looked like when we took our evening walk.

I forgot to show you these before.  When we went to the dog show last month in Washington Dodah's daddy my uncle Pie got a couple of ribbons.

Mom thought it was an Award of Merit, but Pie is so special that he has lots of Merits.

At the New Mexico dog show I was hoping to meet New Mexican dogs.  I thought maybe they would be New Chihuahuas or New Xolowhatsits but they mostly just looked like regular dogs lots and lots of cousins were there too.

Our uncle Chase was there and he won Best of Breed one day and some other ribbons all of the other days.   He came to visit at our house one day but he couldn't play as he had to go be a show dog.  And we have a cousin named Salsa and she is my cousin on both sides because my grandma Phoebe is her grandma Phoebe and my greedy grandma Alice is her great-grandma Alice.   You can see Chase and Salsa's pictures on aunt Penni's website.  And there were some other cousins there too who also had grandma Alice and there was Violet who is my niece because her daddy is my brother Cappy. 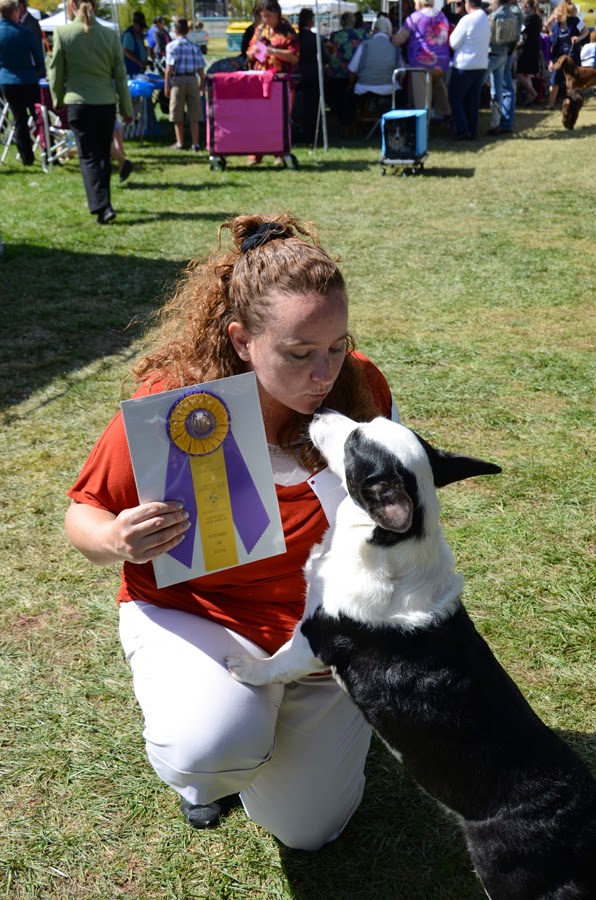 and our other cousin whose grandpa is Pilot and whose other grandpa is Huxley was Winners Bitch too. 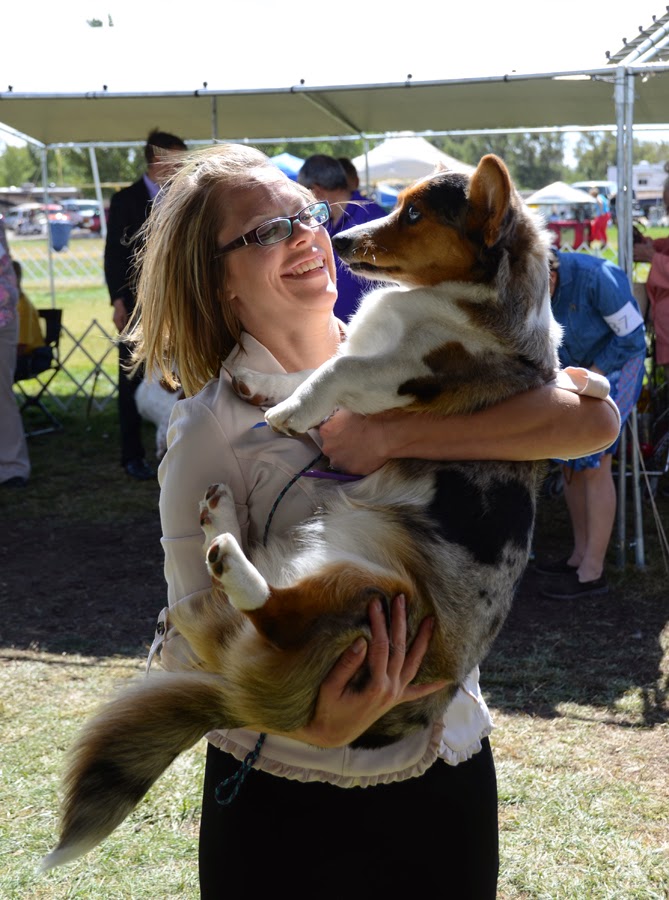 And mommy even got to judge a few dogs.  So she had to be in a picture and everything.  The wind was blowing really hard so she says you have to excuse the way she looks. 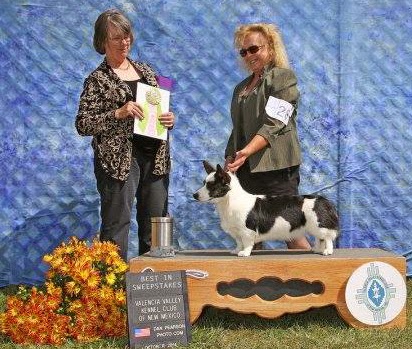 When the dog show ended the wind was blowing so hard that we couldn't go to the park that we were going to so we just went ten miles and stayed at Isleta Lakes RV Park which is across the street from a casino but we didn't go to the casino.  It was an ok park but the wind was blowing and blowing and there was places to walk but it said that dogs couldn't go in the lakes.  And there were nasty goathead stickers that got in Huxley's feets.  Boys must be too dumb to walk around them because he's always the one that gets them in his feets.

But it was a pretty good place anyway and we might stay there again when we go to Albuquerque or to Los Lunas.

Then the next day we went to Homolovi State Park but we weren't there very long this time.  Mom needs to share some ore of the pictures she took last year. We were there right before nationals and then everything got really bad for mom and I had to give her therapy so we haven't looked at the pictures more.  When we were walking at Homolovi in the morning we saw a jack rabbit! and Dodah wanted to catch it and said it would feed the pack for a week.

Then we came to Lost Dutchman State Park and we've been here almost TWO WEEKS!  It is very beautiful and mom will share more pictures with you. 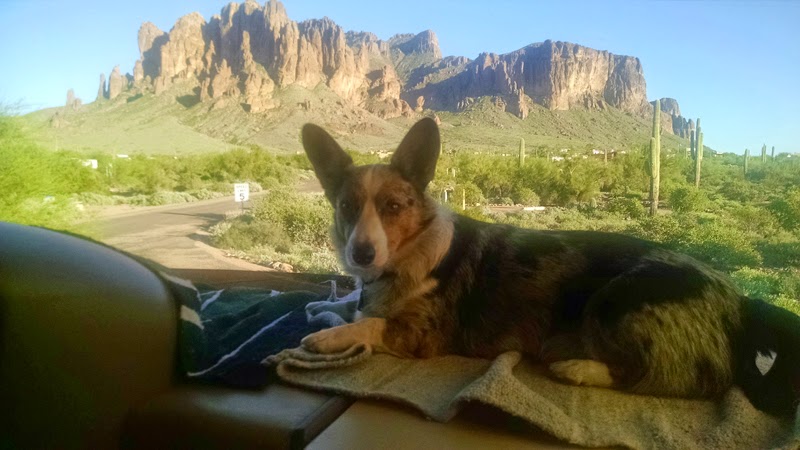 There is lots of good dog walking here but it is a little hot during the daytime so we have to drink lots of water. 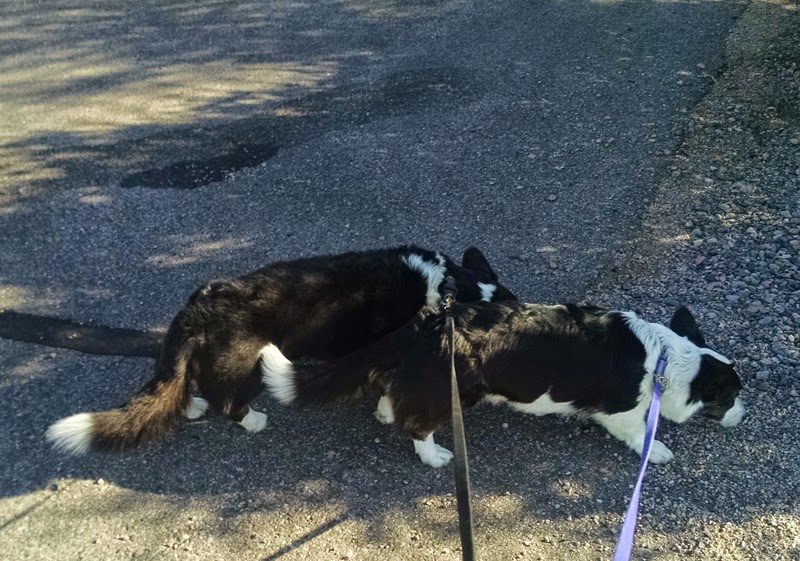 But I haven't done too much walking because I strained my back again and mom is having to give me therapy now and she has given me some good drugs so I feel better.   You want to know what happened? Our house was broken and skinny for over THREE WEEKS. 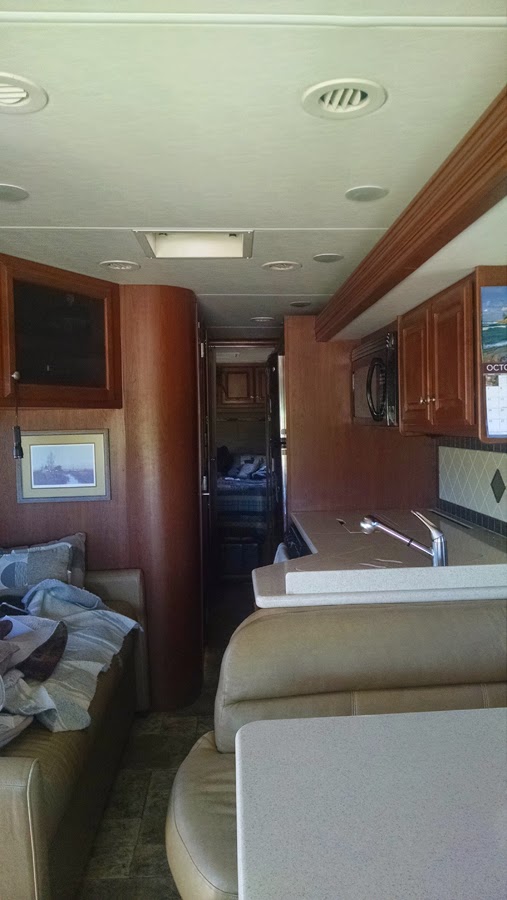 Like this.  And it's only supposed to look like that when we are rolling on the road. 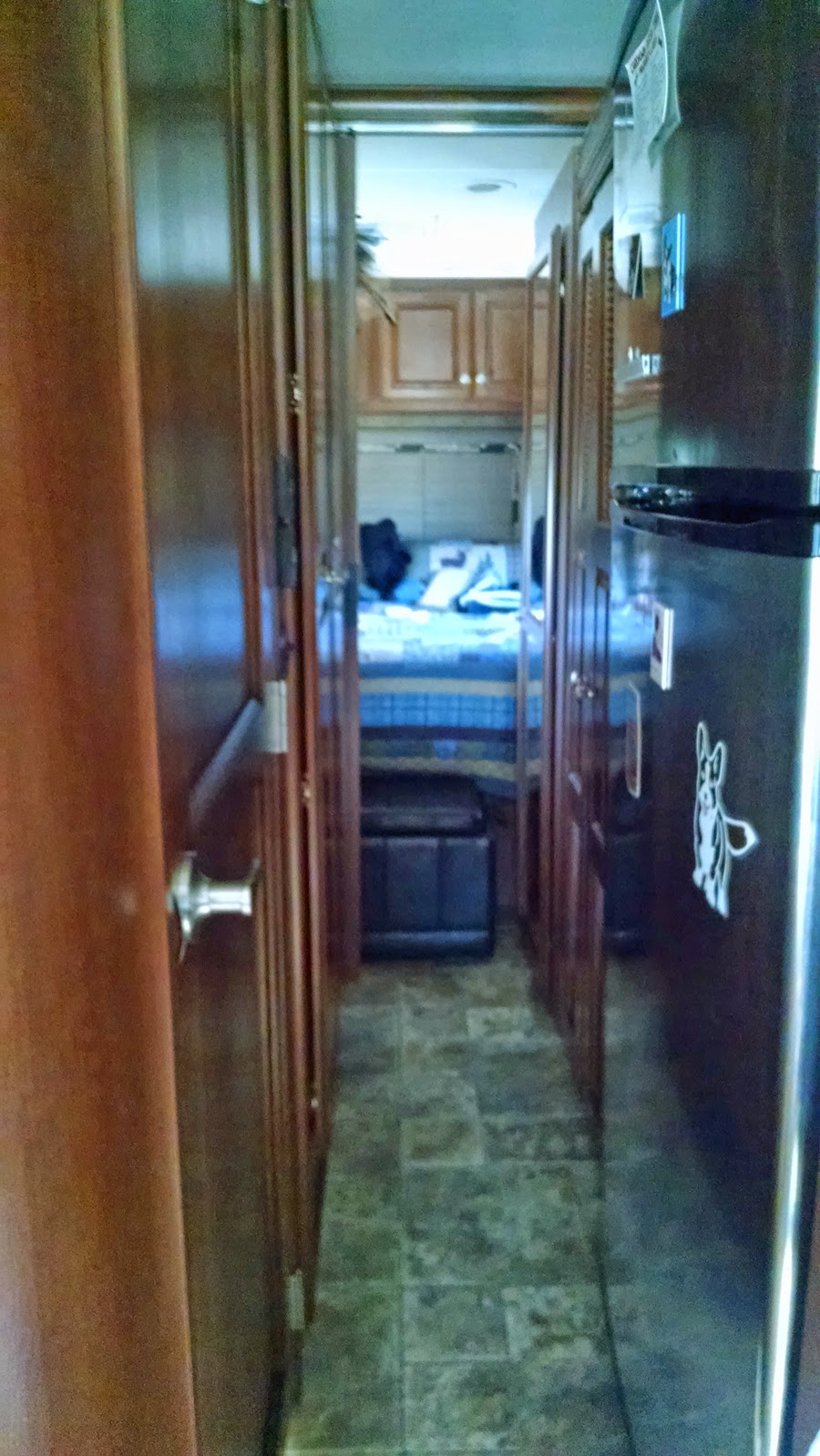 And see the closet where me and Dodah have our crates?  I was in the top and when I jumped out I had to kind of twist as mom caught me because the doors don't open all of the way.  We decided that was a bad idea and now I can't go up there anymore when the house is skinny.

And now our house is fixed and it looks like this again: 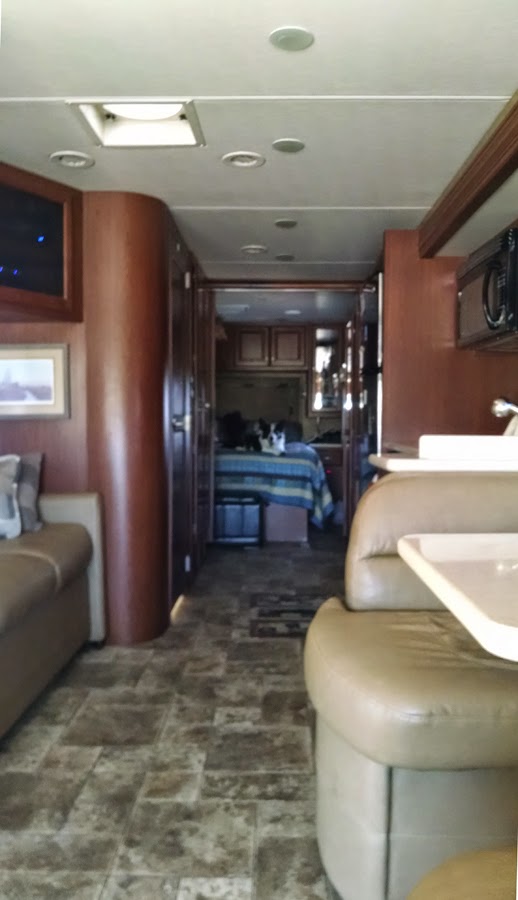 And there is so much room that me and Dodah can even play again now that I am feeling better.  Last night we played for a few minutes but I got tired and the Dodah stopped and sniffed my neck where it was hot and hurting and then she layed down with me instead.  Dodah might be smarter than people think she is.

I usually like staying here because we get to go see our cousins at their house sometimes.   But when we went there this time I had to be on crate rest and it wasn't fun for me. 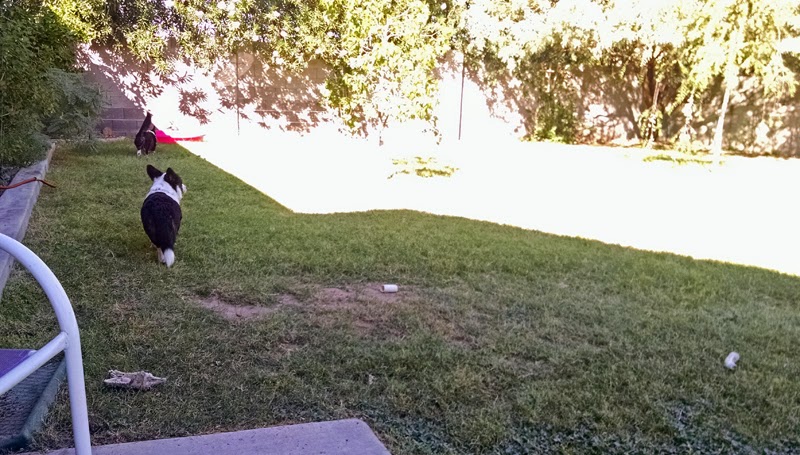 But Huxley and Dodah had fun and got to play in the yard and even in the wading pool and everything.

Today a man came and put something on the windows of our house. 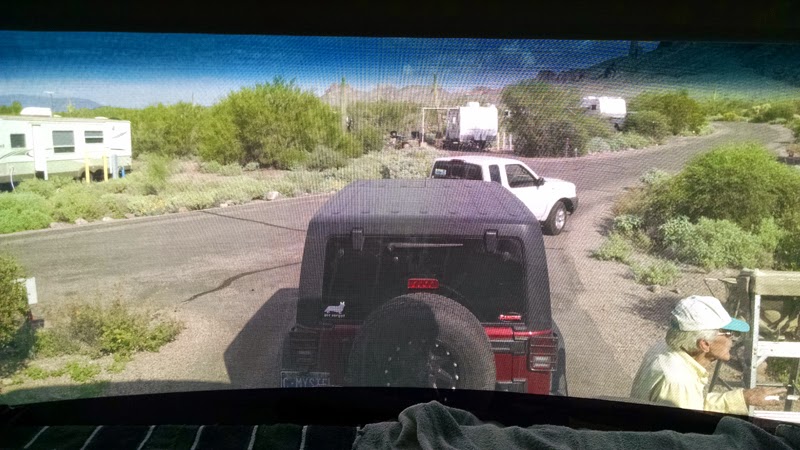 We can still see through the windows really good from the inside. 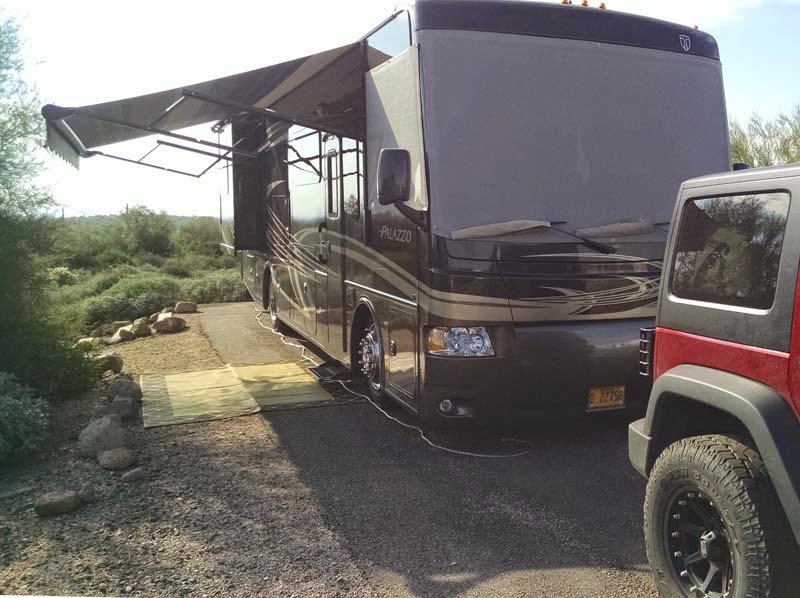 But you can't see us all cute and everyting sitting on the dashboard from the outside! 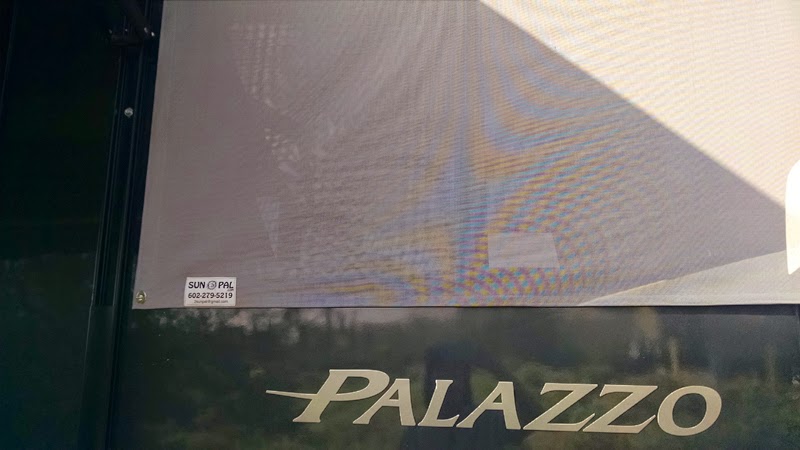 Mom and Dad say it's to keep us all cooler here in the desert.

Hey fans, did you know that other dogs get to have blogs too?   Our friend Lynda sent us this link: http://roadtreking.com/dogs-life/   I'm going to look for more dog blogs so that I can share them with my friends. 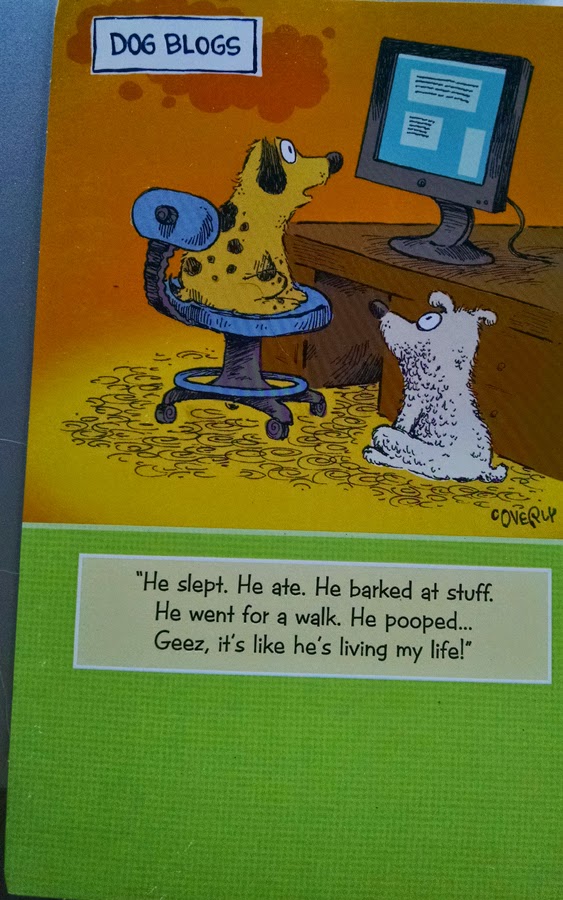